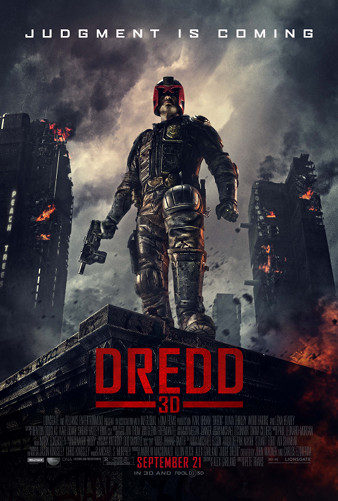 Dredd
based on Judge Dredd by John Wagner and Carlos Ezquerra

Fun fact, cats and kittens: even as I sit down to write this, I still don’t have a really good feel for the Judge Dredd comics. I certainly plan to—I’m scenting vicious satire on the air—but I haven’t had the time since I watched it last week. I’m a busy lady.

Yes, my pop cultural blind spots can still amaze, even as I and the natural progression of time do our utmost to popping them like bubble wrap. But having proved too small in 1996 and tragically nonexistent in 1977, Dredd simply never came onto my radar screen, even when the Empire Podcast discussed it positively back when it was released. It took tumblr recommending it to me for me to watch it. (Why was tumblr recommending? Because I keep “tripping” onto the Domnhall Gleeson tag over there. Simple woman, simple tastes, etc.)

Why sit down and review this before catching myself up and counting myself lucky to live in the digital age? Because this is my blog, I will do what want to, etc., and also because I believe in utilizing my pop cultural blind spots to put myself in media situations that normally wouldn’t exist. In an age of reboots and remakes that assume the viewer has seen the original (Star Trek Into Whiteness, anyone?), it’s almost a superpower when it comes to consuming and critiquing media. That’s why I watched Prometheus before Alien, just to see if it would work. (Spoiler alert: it did not.) Can someone with no knowledge of Judge Dredd beyond having once watched the Nostalgia Critic review the 1996 Sly Stallone adaptation sit down and enjoy it without any prior knowledge?

tumblr’s vigorous recommendation framed Dredd as a proto-Mad Max: Fury Road, an action film whose eponymous and more famous male lead actually takes a backseat to the female lead. In this case, Judge Dredd is accompanied on his investigation into drug lord Ma-Ma’s slum block by Anderson, a rookie would-be judge who failed the tests to become a judge but whose psychic powers make her wildly useful to the force. However, Dredd lacks Mad Max: Fury Road’s stone cold feminist credentials. This is a film where, when Anderson finally gets the upper hand on a thug named Kay who has spent the film tormenting her, she calls him a bitch. And when a quartet of bad dudes turn up to do battle with Dredd and Anderson, there’s a token lady for Anderson to fight. (Some shades of Die Another Day, and not the fun, utterly bonkers kind.) This isn’t to say that Dredd doesn’t have its feminist charms rooted in Anderson’s centrality to the narrative. How rare is it to get an action film with a female lead who has an engaging character arc without any hint of romance? Very rare, and Dredd’s contribution to their score is very much appreciated. But you and I, dear reader, live in a post-Mad Max: Fury Road world, and we are definitely the better for it.

Dredd has the unfortunate distinction of having been released the same year as The Raid: Redemption, another, slightly more popular film about battling your way through an apartment block filled with criminals. (To be clear, The Raid: Redemption debuted in 2011—its American theatrical release was in 2012.) This may have contributed to how it seems to have turned into the kind of cult midnight movie thing that it is now—it probably seemed derivative or even unimaginative next to The Raid: Redemption in the eyes of action junkies.

And yet, while Dredd is undeniably a product of 2012 (it somehow reminds me of Pacific Rim in production design, for largely superficial reasons), it’s also a master class in how to make a reasonably priced sf film that ages well. Four years later, Dredd still looks great. Most of its overt CGI is dedicated to stylizing the effects of slo-mo, Ma-Ma’s new, debilitating drug, and the rest is practically invisible. It reminds me of nothing more than the days of sf films with smaller budgets but more critical eyes—you know, the eighties and some of the nineties. It manages to feel like a throwback in the best way.

I rented this film on iTunes.