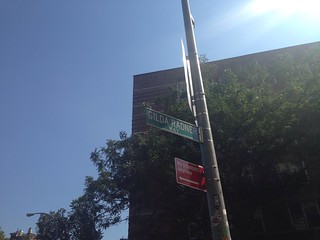 I either saw Cymbeline or The Man from U.N.C.L.E. last night; I’ll let you know when I know.

Bill Murray is confirmed for next summer’s Ghostbusters. I am assuming as a ghost, because a.) it’s a reboot, not a sequel and b.) Dr. Venkman is the worst. He’s so bad he made me pull my wig off in despair for the first (and probably not the last) time in my life.

A new Tolkien story, The Story of Kullervo, will be published in October. It’s in continuity with his legendarium, despite being one of his first passes at Finnish mythology-inspired writing, so Ringers are naturally delighted. Like myself!

Arabelle Sicardi attended a four hour contouring class featuring Kim Kardashian. Her thoughts are wonderful. Her thoughts on the history of black lipstick and its assimilation are also fascinating. I remember when black lipstick was just a Halloween thing at the local drugstore; now my weird of weird unfindable makeup item is red mascara. (It is for an Old Gregg costume. AND ALSO MY LIFE)

Jon Oliver tackles the absolute horror show that it is sex education in America. I am horrified by what I’ve learned about American sex education but enlightened by the short sex ed video at the end.

X-Men: Apocalypse will feature Angel in a fight club in 1982 East Berlin. This is more beautiful than I could ever believe.

Mey at Autostraddle speaks to the legendary Miss Major about the Stonewall Riots and the exclusionary garbage that is the upcoming Stonewall film.

Autostraddle’s staff has compiled a list of the best one hundred movies featuring lesbian, bisexual, or otherwise queer women.

This NPR article on how race is constructed in Brazil, which traditionally has thwarted racial community but is now changing, is really interesting.

In a Nylon interview, Kristen Stewart’s only answer to a question about her sexuality was “Google me, I’m not hiding.” SCREAM. Dorothy Snarker at Indiewire has an interesting response regarding how young queer women in the public eye are shrugging off labels and how that complicates previously held beliefs regarding queer visibility. Personally, I tend to label myself queer because bisexual is frustratingly gendered, pansexual doesn’t feel right to me, the current labels we use for sexual and romantic orientations were recently coined and therefore occasionally feel adrift from queer history for me, and queer is a verb that also indicates my perspective on the world. But I also feel that it’s useful and necessary to also use bisexual, because there is a modern history with that term, it is used significantly enough in my culture that it’s useful as a signal word, and it’s actually a noun. Also, “depraved French-American bisexual” trips off the tongue easier than “depraved queer French-American”.

Pretty Little Liars revealed who has been terrorizing its cast the whole show—and it’s a crazed trans woman! NO. TERRIBLE. STOP.

To celebrate the Science Fiction Writers of America’s fiftieth anniversary, the organization is producing a cookbook full of recipes contributed by members! GENIUS. I especially love this interview, where the editors mention some people are getting different authors to sign their copy by signing their recipes.

Good Star Wars: The Force Awakens news, everyone! A lot of stuff came out this week, courtesy of Entertainment Weekly; io9 has a round-up for you. And here’s Captain Phasma’s armor, from the D23 Expo floor.

David Oyelowo will be playing James Bond in the audiobook production of Trigger Mortis (do I hate that title or do I love that title?). Huzzah!

Rose McGowan is moving into directing and using her unique situation to fight back against sexism in Hollywood. I adored McGowan’s turn in Once Upon a Time and I really admire her and respect her after reading this.

Mark Harris at Grantland reflects on the failure of Fantastic Four, the current state of the superhero genre, and how superhero franchises are currently disrupting careers in Hollywood:

[Deadpool] stars Ryan Reynolds, who, if things had gone according to plan, would now be in negotiations for $20 million plus a piece of the back end on Green Lantern 4 but instead has gotten a second shot at the genre, this time as an air-quotes superhero who kills people and says, “Please don’t make the supersuit green! Or animated!” That’s funny, but it’s what is known in theater as an expensive laugh. Jokes that say “This is all bullshit” tend to make an audience feel slightly skeptical the next time you try to convince them that no, it isn’t.

Sesame Street will be airing first on HBO for its next five seasons, with episodes available on PBS after a few months. I’ve seen a lot of people poking fun at the idea, but I find it both fascinating and a little disheartening that Sesame Workshop seems to have to do this to survive and expand.

At BuzzFeed, Madison Pauly shares the story of Taylor Woolrich, a young woman whose efforts to legally protect herself from her stalker stalled to the point that she began to fight back against Dartmouth to legally carry a gun on campus—and then the conservative gun lobby tried to manipulate her to their ends. Such a harrowing story. I feel so much for this young woman.

Trans people must submit to sterilization to legally transition genders in the majority of Europe, including France. (JE SUIS HORRIFIÉ.) This article covers a lot of the backwards, horrible, and downright cruel policies trans people have to suffer through in Europe. It makes me sick.

Writer, actress, and comedian Paula Pell shares eight sketches that she wrote for Saturday Night Live that she adored.

Books
Purchased:
Added: Wylding Hall by Elizabeth Hand (via Ana), Horrorstör by Grady Hendrix (via io9), The Angel of the Revolution by George Griffith (via io9), She Walks in Shadows edited by Silvia Moreno-Garcia and Paula R. Stiles (via The Mary Sue)