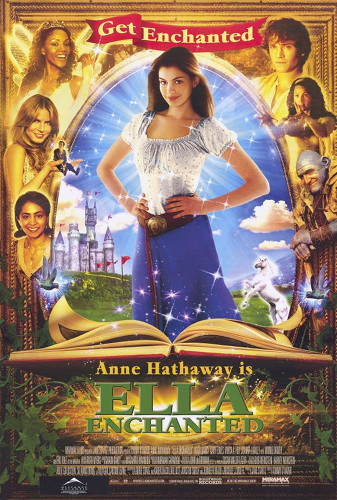 Ella Enchanted
based on the novel by Gail Carson Levine

I was two-thirds of the way through Ella Enchanted when I realized I’d never seen Ella Enchanted before. I mean, it seemed so obvious! In 2004, I was a preteen mourning the loss of The Lord of the Rings who had, in fact, actually read Ella Enchanted and liked it. I even distinctly remember reading about Cary Elwes playing the villain in this film and taking a moment to think about what he would even look like with darker hair. (I am always fascinated by what natural blondes look like with darker hair, for reasons presumably related to my lifelong adventures in hair color.)

And yet, when Heidi Klum turned up as the giantess Brumhilda, I realized that I was on deeply unfamiliar ground. I must have been stitching something together out of The Princess Diaries and A Knight’s Tale to heal over the mental wound this film inflicted on my generation of lady geeks. It’s a wound so deep that, when I proposed this film to my erstwhile Valkyries as a bad film to skewer, even those mighty mavens balked. Surely, though, with a decade between both me and the film and me and my culturally bloodthirsty preteen self, I could take a gentler and wider view on this much reviled film.

(Also Hannibal’s seeped into my bloodstream enough that I am compelled to seek out the filmography of both Hugh Dancy and Mads Mikkelsen, so expect King Arthur to be covered in these pages soon enough. Moving on…)

Ella Enchanted has precious little to do with the novel it’s based on, besides its basic premise. A girl named Ella is given the “gift” of obedience by a fairy, she goes to a giant’s wedding, and she falls in love with a prince named Char(mont). Other than that, they largely have nothing to do with one another, which makes Ella Enchanted, essentially, Shrek for teenage girls.

I mean, there’s a narrator (played by Eric Idle, so we’re already off to a snarky start), fairy tales getting skewered, a soundtrack crammed full of classic hits (Kelly Clarkson’s cover of “Respect” at her post-American Idol glossiest is indicative of the aural proceedings), anachronisms, pop culture references disguised as jokes, and a dance number to cap everything off. I have largely understood Shrek’s impact in terms of animated films. Just look at the bulk of Dreamworks’ output in the aughts, even if you don’t include the Shrek franchise. After Shrek, kids’ movies started picking up more pop culture references and CGI animated movies riffing on fairy tales were noticeably more prevalent.

But, despite its wide impact, to think of Shrek influencing a live-action movie seems odd to me. That’s largely because Ella Enchanted is a very strange and lonesome outlier. Its attempt to marry together the Shrek formula with a live-action family-friendly teen comedy doesn’t really succeed, but it’s kind of fascinating to watch the movie fail. For instance, the anachronistic medieval setting is theoretically interesting—one extra is a grunge page, predating Noelle Stevenson’s vision of monkpunk by about eight years—but weak jokes about carriages as taxis pale in comparison to the invention of the term “foxy lady” in A Knight’s Tale. (A Knight’s Tale: why aren’t we all just watching that movie right now?) Plus, the CGI is appalling, even for 2004: the opening, in particular, looks terrible, even streaming on a laptop.

But Ella Enchanted is, almost disappointingly, the rare fantasy text that even acknowledges that people of color and racism exist. After her stepsisters discover her curse, they force Ella to break up with her best friend Areida, played by Bend It Like Beckham’s Parminder Nagra, by telling her that she could never be friends with an Ayorthaian. It’s not remotely progressive, to be sure—the only black woman in the film is Vivica A. Fox’s airheaded Lucinda—but managing to include three named characters played by actors of color who have lines and are integral to the plot makes Ella Enchanted stand a little taller next to more serious fantasy films that boast lily white casts.

The cast is more or less game. Hathaway’s Princess Diaries charm and snark suffuse her screen presence, and the climactic scene where Ella finally does break her curse is wrenching to watch, because she’s giving so much more than the script gives her. Cary Elwes as the film’s villain tips so far into absurd, pantomime madness that it circles back to weirdly fun in very short order. (Also: that neckbeard. You may need to rewatch The Princess Bride after this to maintain your Elwes crush.) And Hugh Dancy is giving his best bland matinee idol here, because the script just… kind of forgets to make Char a character. (Which would feel like a nice deconstructive touch, if the movie was smart enough to do that.) Knowing him mostly through his amazing work on Hannibal, it is kind of adorable to see production desperately race against time in regards to his facial hair, failing utterly in one scene.

Ella Enchanted has, through sheer age, become a fascinating “what if?” scenario for kids’ movies in the early aughts. It’s a much less fascinating movie, of course, but it’s hardly a bad way to spend a Saturday night.

I watched this film on Netflix.