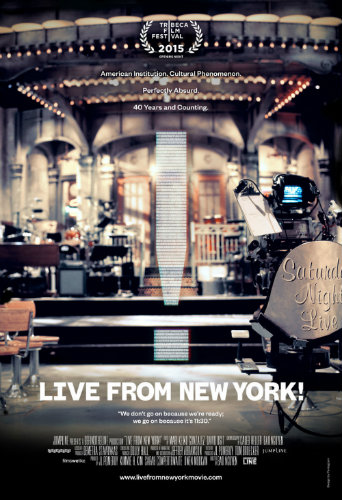 If you want to know how Saturday Night Live is made, you have an an embarrassment of riches at your hands. There’s Live From New York!, biographies about former cast members and writers, memoirs by former cast members and writers, the Kenneth Bowser television specials covering every decade of the show, audition tapes, the show’s own anniversary specials (including last year’s three hour extravaganza), James Franco’s student film project slash actual festival film Saturday Night, Tina Fey’s fictionalized take in 30 Rock, and the fact that former head writer Seth Meyers’ writing team on Late Night with Seth Meyers endlessly makes fun of him for talking about Saturday Night Live so much.

But if you want to see what it has made, both intentionally and unintentionally, then you’ll want Live From New York!. (No relation to the recently revised and authoritative oral history.) Bao Nyugen’s documentary may co-produced by Saturday Night Live‘s costume designer Tom Broecker, but it embraces its outsider status to put the show in its historical and cultural context. How does a scrappy variety show that barely expected to last six episodes become an American institution? How has it interacted with, influenced, and been influenced by American culture? Nyugen elegantly makes his thesis statement—that the show and New York (especially a New York) are intertwined in a fascinating symbiotic relationship—in the documentary’s opening credits. He simply runs what looks to be the current Saturday Night Live opening credits sans text, sans performers, and sans music, leaving us panning over the city that’s always been at the root of it, no matter where its performers hail from.

Nyugen also places the show’s troubles with diversity front and center. It’s heartbreaking to watch the breathtakingly talented Garrett Morris, the show’s first black performer, discuss the short shrift he was given, even with Lorne Michaels continually prodding the writing staff to give him something to do. But it’s not as if the show has improved by leaps and bounds in the last forty years on that front, although the addition of the lovely Sasheer Zamata and the amazing Leslie Jones has shown what the show has been lacking. The Kerry Washington sketch where she’s forced to play three black women in a single sketch is played to drive that point home, but a cold open where David Alan Grier and Ellen Cleghorne try to open the show as the first two African-American performers to do so only to be interrupted by Chris Farley feels like a particular stake through the heart.

(No mention is made of the fact that the show has occasionally “resorted” to blackface, which is kind of infuriating but, I imagine, a decision Nyugen did not make lightly.)

So often, when the question of sexism on the show (or in comedy, or in any industry, or in anything), a single soundbite from a lady type is considered sufficient. Instead, Nyugen asks several women from the show’s history to share their experiences with sexism on the show. Laraine Newman found Lorne Michaels, who was discovered producing a special for Lily Tomlin, a champion for female comics, Julia Louis-Dreyfuss found herself walking into a deeply sexist environment, Tina Fey found it sexist more in the sense that a male-dominated writer’s room will rarely champion and value female voices. Due to the nature of sexism in its various forms and the evolution of the show, there’s no one answer to that question—save for, of course, Fran Leibowitz’s arch riposte that it’s still sexist because people are still asking that question. And the whole piece is punctuated by by a clip from an early sketch whose entire punchline is that John Belushi is hitting Gilda Radner.

Saturday Night Live‘s unique relationship with American politics is pretty well-covered ground, but it’s absolutely fascinating to see several performers discuss their iconic political impressions as just another day at work. Tina Fey shrugs off the idea that her Sarah Palin impression did more damage to Palin’s image than Palin herself did. (I firmly maintain that Fey did a service to our country and always will.) Will Ferrell downplays the power of his George W. Bush impression, but I get the feeling that that is simply because Ferrell’s comedic genius to us is simply just his normal. Dana Carvey casually explaining, deconstructing, and then reconstructing his George H.W. Bush impression with a string of nonsense is simply magical. But Amy Poehler (as per usual) has the best story. (It’s a truth universally acknowledged that any story told about Amy Poehler is amazing.) She says that she always approached her Hillary Clinton impression as an opportunity for Hillary to say all the things that she can’t. It’s such a perfect encapsulation of her ferocious, optimistic, and positive comedic heart that I could swoon.

As a documentarian, Nyugen is elegant and subtle. I actually think fanvidders and those who love their work will really appreciate his work here; it’s no easy task to juxtapose footage already loaded with meaning in such a way that clearly communicates a new meaning. Although laying down “The Revolution Will Not Be Televised” over a rapid-fire montage of the political happenings of the last forty years is an awkward misstep (the show was originally countercultural, but never radical), it’s engaging, funny, and, at times, heart-wrenching. I know, as a fan of Saturday Night Live, that I’m an easy sell for this, but we absolutely need more things like this: televisual criticism of televisual properties.

I saw this film in theaters during the Tribeca Film Festival.

Live From New York! will open in theaters in select American cities on June 12th. If you’re interested in hosting a screening in your hometown, you can set something up through Tugg, a website that facilitates screenings by guaranteeing an audience.