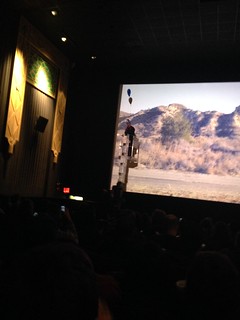 Pictured above: a true American hero at my screening of The Avengers: Age of Ultron, removing a Paul Blart: Mall Cop 2 balloon from the screening room.

I reviewed the 1997 film Wilde for Queerly Seen’s Queering Wilde month this week, and Renay and I continue our adventures in Xena: Warrior Princess with episode 107, “The Titans.”

Let’s kick off May and the wide release of The Avengers: Age of Ultron with this legendary superhero-themed performance by drag queen Tandi Iman Dupree.

The first trailer for the Disney Channel Original Movie Descendants is here, from apparently 2002, specifically the week Kingdom Hearts was released. Bless. BuzzFeed has the profiles of all the Disney kiddos, including Cinderella’s son, Chad. CHAD. This is going to be amazing. (Dopey’s kid being the nerd surprises me; surely, Snow White and Prince Ferdinand could have scraped together a total dork?)

Cecily Strong slayed at the White House Correspondents’ Dinner last Sunday. “What can I say about Brian Williams? Nothing, because I work for NBC.” I love her so much.

The Transformers franchise will be introduced a combiner robot named Victorion composed of five lady-identified robots. I’m torn between happiness at seeing more ladies in such a male-dominated franchise and, as always, befuddlement that giant robots operate on gender binary. But more awesome lady robot toys and comics for kiddos, so yay! Amy Diegelman and Jessica Plummer discuss at Panels.

James Whitbrook at io9 offers a helpful overview of the development of the Joker as a character over the years, from a more comical character to a dangerously insane one.

This article on seven reasons why guilt is not ethically helpful really fascinates me. I’ve been keep a feelings journal lately, since I’m awful at identifying my emotions, and I’ve been amazed to see that you can apparently just genetically inherit Catholic guilt even when you weren’t even raised in the church. I’m not sure if I’m completely on board with it, but it does offer different and potentially more helpful ways to deal with guilt.

At New York Magazine, Alex Morris profiles Stacey Johnson, a stylist who specializes in helping trans women learn elements of femininity that are traditionally socialized instead of explicitly taught. It’s really interesting to see Johnson, who is a feminist, grapple with the ideological conflict of teaching what can be construed as feminine stereotypes to other women as “correct” femininity and the relief her customers feel when they can be immediately read as women in our culture.

The cover for Speculative Fiction 2014 has been revealed! It’s incredibly cute and by the way I’m totally in it.

The Lord of the Rings (among other films) cinematographer Andrew Lesnie has passed. Film School Rejects has, perhaps, the best tribute, by highlighting ten of his greatest shots.

X-Men: Apocalypse set photos have surfaced. Nightcrawler is wearing a Thriller jacket, Jubilee is a mall baby, and Sophie Turner is beauty, grace, telekinetic kick in the face. Everything is perfect. Here’s a better official behind-the-scene photo. (Jubilee’s shirt’s font is too modern, but it’s X-Men in the 80s, so it’s all I ever want.)

This piece of Marvel meta about Howard Stark, the immigrant experience, and the American dream is spot-on.

“The Gold Lamé Dream of Bette Midler” is a fascinating 1973 Rolling Stone article on the career of Bette Midler. I’m interested in both the style of the piece—very Tom Wolfe, Ed McCormack—and the history it covers: the early seventies, Midler’s beginnings honing her performance in gay bathhouses, and the quiet transformation of the counterculture of the sixties.

A 2011 The Atlantic review of Adam Sandler’s atrocious Jack and Jill points out that when men play women, it’s often for comedy, while when women play men, it’s often for drama. I’ve been thinking a lot about drag and drag in comedy specifically lately. Drag often seems like a wonderful medium for male-identified folk to express femininity in a culture that devalues it (the recently booted Miss Fame from RuPaul’s Drag Race cannot even make herself do ugly drag on purpose). Drag in comedy, however, needs to be about someone playing a character, not played for the cheap laughs (?) of seeing a man in a dress. I’m still chewing on this, but this article helps.

Speaking of Adam Sandler, several Native American performers walked off the set of his latest comedy The Ridiculous Six, due to its humiliating, racist humor and disregard for safety.

At Polygon, Gita Jackson talks about the larger percentage of female directors in horror and how horror films treat women’s fears as real and true. (Mostly because it’s hard to argue with monsters coming after you.)

Kim Masters at The Hollywood Reporter talks about the utter mess that is the internal handling of the DC cinematic universe at Warner Brothers. It’s… it’s cause for concern.

ScreenCrush’s Matt Singer endures the Marvel Cinematic Universe marathon and, among other things, points out something very important:

Downey’s trick to command any scene: Just start talking over people. It never occurred to me before what a Robert Altman character Tony Stark is. Downey goes full Altmanesque in a few sequences, where he renders dialogue almost totally incomprehensible. It’s making me want to rewatch Short Cuts.

My Avengers: Age of Ultron review will go up tomorrow, but here’s a handful of thoughts on the film:

Pixar artist Sanjay Patel is developing an animated short about a kid bored by his family’s Hindu rituals one day and daydreams a superhero version of what he’s hearing. Genius!

Netflix branches out into documentaries with What Happened, Miss Simone?

Kristen Stewart called out the film industry for being sexist.

Somebody did a lovely cosplay version of Kevin Wada’s fantastic Catwoman redesign. It looks fabulous!

Ant Roman, the amazing baker behind Nerdache Cakes, is running a Kickstarter so she can open a physical location for her bakery! She does fantastic work and some of the reward tiers involve food.

Autostraddle has a master post about what is going down in Baltimore.