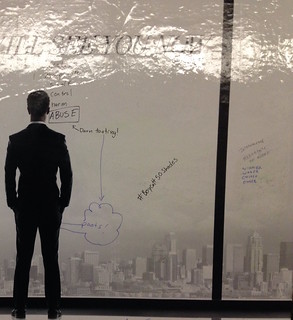 Two very different humans vandalized this Fifty Shades of Grey poster, but they were united in their distaste for it. Magical. I’ve been sick this week, which has been fun. Oh, spring, please come back, so I can wear nice things. (Or someone give me enough money to afford cute winter things.)

The second wave of Fifty Shades of Grey thinkpieces brings with it a very interesting dialogue on class:

Jessica Williams has stated that she won’t host The Daily Show, although she’ll still turn up to troll from time to time. Whatever she does, it’s going to be awesome.

Abraham Riesman at Vulture digs into the history of Harley Quinn, her success, and her place as a feminist character because she’s allowed to be as horrible and petty as she wants.

Baby Nightcrawler has been cast for X-Men: Age of Apocalypse. Well, we’ll see where this goes!

Joshunda Sanders and Diana Barnes-Brown look at enlightenment, consumption, and what’s expected of an enlightened woman in capitalism.

Kyle Turner at Movie Mezzanine talks about The Imitation Game and what constitutes a truly queer film. I really enjoyed this piece, because this is exactly why I identify as queer as well as bisexual: queerness carries with it a connotation of active subversion that goes beyond sexuality. Fascinating.

Kristen Stewart is the first American actress to win a French César Award for her work in The Clouds of Sil Maria. I’m really glad Stewart is getting recognition for her talents.

Here’s Eddie Murphy at the 1988 Academy Awards calling out the film industry for how it treats and celebrates black actors and actresses. And here’s hoping someone does the same at tonight’s Oscar ceremony…

Scarlett Johanssen has assembled a supergroup of lady musicians (including Este Haim of HAIM) to create the Singles, a girl group in the vein of the Go-Go’s. I have a playlist called “future eighties” that this would go great on.