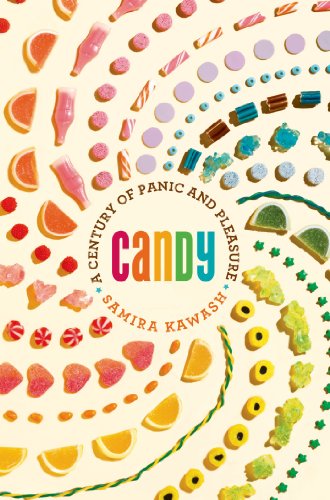 “Do you have an opaque bag?” I asked the Best Buy employee. “It’s a gift for my dad and I don’t want him to see what it is,” I completely lied, and she handed one over. I immediately stowed my true prize inside—an economy pack of Juicy Fruit gum.

I hid it in my nightstand drawer, alongside my copies of Princess Princess. I had two pieces a day, the better to draw it out. It satisfied both my sweet tooth and my constant, anxious fidget, so I could stop picking at my nail beds or sucking on my teeth and gums. I chewed and chewed until I was left with a flavorless, stiff putty. It was a marvelous week, until I came home from school to find my mother ominously still at the threshold of my bedroom.

It was as if Madame had caught me with a stash of hash. It was immediately confiscated, of course, and a sharp eye was kept on my gum consumption. Later, she began to soften, but I still spent many trips to the grocery store reading ingredients off of gum wrappers to her to make sure they weren’t going to give us cancer. Candy always came into my childhood home with suspicion. (Whereas chocolate was only ever suspect for being milk or, worse, white. Blurgh.)

Samira Kawash opens Candy with a similar story: at a playdate between her son and a friend, another parent implied that she was poisoning her child with a handful of jelly beans. The idea that a little candy—a little kid’s fistful of jelly beans!—could ruin her son’s life sat with Kawash, until she became the Candy Professor and started looking into both the history of candy in America and the history of Americans’ relationship with candy.

In our more secular culture (I’m speaking specifically about the American experience here), the moral weight previously felt through a common religion has dispersed into other avenues—productivity, shopping, heteronormative romantic love, and, most pertinent to Candy, food. Recently, I mentioned to someone that I needed to pick up some almond milk from the store. “Ah,” she smiled beatifically, “you’re healthy.” I almost didn’t have the heart to tell her I was just lactose intolerant.

And that’s just what I put in my coffee (and copious bowls of Apple Jacks, because I am a lady). No matter how you feel about candy, we can all agree that’s the ultimate unnecessary, from a nutritional standpoint.

Or can we? What elevates Candy is how Kawash looks into not only the process of how candy was made and consumed in America, but also the cultural importance and narratives assigned to it. (After the determinedly myopic Egyptomania!, this was a welcome relief.) For instance, back when the problem was Americans not getting enough to eat, the high calorie count in candy bars was considered a boon. Kawash provides charts from the early twentieth century that prove candy is more economical than eggs because candy can provide more calories for the same price. And nutritional science didn’t see much difference between carbohydrates from candy and carbohydrates from vegetables, so a candy bar was a fantastic choice for lunch.

So the panic in the book’s subtitle was aimed at how the candy was made. Confusion and fear over the industrial revolution were literalized in warnings against disgusting things done to falsify candy in factories. Much the same thing happened in the seventies, when the myth that somebody in your neighborhood is going to put razorblades in little Lorelei’s Snickers bar on Halloween first rose to prominence, despite the utter lack of verified stories. (And the few that cropped up were soon found to be a lot more complex than that.) As politics heated up and shook up the known universe, the community was no longer a safe space. Thus, panic.

Kawash resists politicizing candy or food, which I heartily appreciate. She’s definitely pro-unprocessed foods, but points out that nutritional science is always learning something new and often learning something contradictory. Candy, she argues, is just candy. It’s not food, but it’s not going to actively hurt you (unless you only eat candy), and it’s definitely not Satan. The book isn’t all moral panic and reassurance, however; she does cover some intriguing chapters in American candy history, such as the heyday of sweetened cereals in the seventies. Did you know that the official term for crunchy marshmallow bits is Marbits? Or that Baron Von Redberry was a thing? The past is another country, indeed.

I work for a division of Macmillan.