Thunderball
based on the novel by Ian Fleming 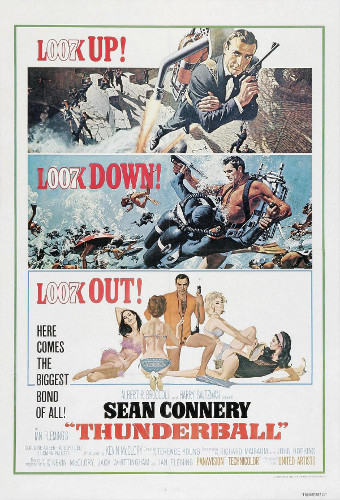 While I’d never seen Thunderball, I was very, very familiar with the film’s theme song. You see, just as I was a repetitive reader as a child, my parents are repetitive listeners of albums in the car. My grandiose affection for the 1993 The Three Musketeers is undoubtedly a product of the fact they played that soundtrack in the car from, I presume, 1993 to 1997. In any case, my mother became very fond of a Tom Jones’ greatest hits collection, and “Thunderball” was included. “What’s New, Pussycat?” made perfect sense to me, but “Thunderball” never did. My memories of the song, in fact, made me think I’d wearily seen the film as a child, but I hadn’t—I would have remembered loving it.

Thunderball finds British secret agent James Bond recuperating, after a particularly nasty altercation in France, at a health clinic. But the world of espionage has no holidays, and Bond runs into Count Lippe, a man with clear connections to the nefarious SPECTRE. Just as Bond stumbles onto a deeper plot, he’s summoned to London. SPECTRE, through an intricate plot involving body doubles, has gotten its hands on two atomic bombs, and wants one hundred million pounds in uncut diamonds in exchange. If they don’t get the diamonds, one city gets blown off the face of the earth. Bond travels to Nassau to get to the bottom of things. Get ready—it’s the biggest Bond yet!

This is it. This is the Sean Connery James Bond movie for me. I mean, the plot is essentially “SPECTRE’s yearly bake nuke sale”—the cheese is complimentary with the ham. Perhaps it was the earlier viewing hour (seven o’clock is the best time to watch a movie!), but the pacing had picked up. While my parents joined decades of critics in pointing out how slow some scenes were, I found myself riveted. There’s moments of delightful camp—any and all of Bond’s wildly inappropriate quips, including, joyously, a failed one where you can just see him thinking, “Not my best, not my best”—and moments of real tension and fear. One of the Bond girls (Thunderball boasts four in total), Domino, interacts a great deal with the main villain, Largo, and the way that storyline pays off is just fantastic. I often find that it’s difficult to balance campy humor and darkness without either getting too flippant or too cynical, but Thunderball finally manages it. Of course, it also features Bond blackmailing a nurse into sex, which… rage. Blind.

Clearing my eyesight are the women of Thunderball—the aforementioned Domino, who, despite being the official love interest of the film, gets a little character arc all to herself. Luciana Paluzzi gives Fiona Volpe such sharp, glittering, clever malice that her surname is more than merited. A single year after we meet the first bad Bond girl turned to the side of good by Bond’s magical penis, Fiona takes that narrative and spits it, snarling, into Bond’s face: “But of course, I forgot your ego, Mr. Bond. James Bond, the one where he has to make love to a woman, and she starts to hear heavenly choirs singing. She repents, and turns to the side of right and virtue… but not this one!”. Dreamy. And I have to mention Paula, Bond’s assistant—while her ultimate fate is touch and go at first, it’s ultimately her own, and her hyper-casual, eye-rolling attitude towards Bond is much appreciated. (In fact, she reminds me of no one so much as Saturday Night Live’s Cecily Strong. Can she and Kate McKinnon, as Pussy Galore, do a Bond skit? I’d be so down.) Of their spear counterparts, I was most delighted with Q and Felix. Q has to venture into the field to arm Bond, something he’s not very pleased about, and CIA agent Felix Leiter’s main role is to rescue Bond and wear the loudest Hawaiian shirts money can buy in 1965. Solid choice.

But I think my favorite thing about Thunderball is that it’s gorgeous. I actually sat up and said “Thunderball actually has cinematography!”. The cinematographer is the same (Ted Moore), but I guess the last three were dry runs or the challenge of shooting underwater brought out the best in him. It also helps that Nassau is gorgeous. The most gorgeous scene in the film is when Largo’s minions cover up a crashed aircraft. Not only is the preceding sequence brilliantly tense—we see more of the villains on their own in Thunderball, which is just more interesting—but the cover-up is so quiet and elegant, and yet so quintessentially, if not Bond, spy-fi, that I was just blown away. If this is what they can do a single film after they finalize the recipe, I’m eager to see what the future—well, past—holds.

Bottom line: I found it! My favorite Sean Connery Bond film! The plot balances camp humor and actual darkness elegantly, the Bond women get a little more agency than their previous outing, Q and Felix are great, and it’s honestly gorgeous. Of course, it does have Bond blackmailing a woman into sex, which. Rage. Blind. Still, well worth a watch, but heads up.