I have recently discovered a love of cooking. I mean, I’ve always liked baking—as a little kid, hanging out at Clare’s basically meant making cookies with Clare from the prepackaged dough you can buy at the store. My adult love of cooking really started when I looked at a box of pancake mix and realized that it didn’t ask for eggs. The idea of dehydrated eggs grossed me out, so I began making my pancakes from scratch. But it’s been absolutely encouraged by a recent fannish food blog, which I’d like to highlight as we recover from Turkey Day 2011.

First and foremost in my heart is The Inn at the Crossroads, whose mission it is to make every dish mentioned in A Song of Ice and Fire (within the limits of legality, of course—they won’t cook dog, horse, or live doves into a pie). The cooks, Sariann and Chelsea, are fearless—I’m still deciding if making and eating grilled snake just to say I’ve done so is a good idea or not. What impresses me the most, however, is the care that goes into each recipe, as they experiment with medieval recipes and modern. In fact, most posts on their blog include a medieval and a modern version of the recipe in question. They have more in common with other blogs and websites that recreate medieval food than other food blogs, which I really appreciate—since smell is such a memory trigger, I find making medieval food absolutely fascinating. And delicious. To get started, I recommend either Modernish Oatcakes (my own efforts pictured below), a unique and really easy Scottish recipe that dates back to the 1800s, or Iced Milk Sweetened with Honey, another easy but unique drink. (It’s my party trick recipe, because most people have milk, honey, and cinnamon in their house.) 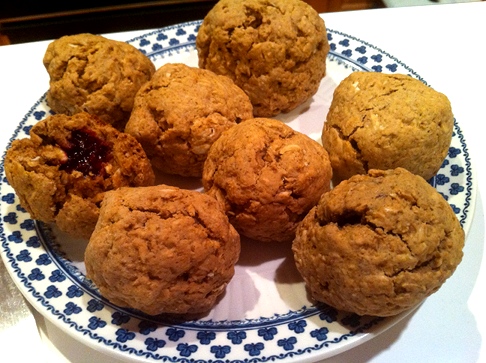 For a while, I thought The Inn at the Crossroads was only of the only dedicated blogs on this topic, but io9 brought to light Fictional Food, which focuses on making food in books, including A Song of Ice and Fire, Harry Potter, The Hunger Games, and more. Despite the mission statement and the site design, it only boasts eight or so recipes, most of which are taken from The Hunger Games. I haven’t tried any of them—The Hunger Games is a series I care very little about—but I look forward to seeing how this blog develops, given its wide focus.

Of course, there’s more out there than just these two blogs. Recipes for butterbeer, for instance, abound. The most promising I’ve found comes from the science food blog The Island of Dr Gâteau. Jess, the proprietor, has adapted a recipe from the Tudor cookbook The good Huswifes Handmaide for the Kitchin. I had trouble believing that butterbeer existed before Harry Potter, but there’s my cultural blind spot for you. In any case, if you’re interested, check it out. A good way to explore fictional food is to have a specific recipe in mind while you search—you’ll often find regular recipes that fit the bill quite nicely, even if you have to explore medieval food, which I love doing. (I’m also on the lookout for a good lembas recipe, by the way, if anyone’s got one…)

Well, this week was Thanksgiving here in the US. I drove home on Tuesday (missing my film class like a terrible person—but I’d already seen The Crying Game!) and settled in, running errands, helping my mom cook (the plan to do it myself backfired), and, of course, reading. This week, I’ve torn through Pretty Girls in Little Boxes, Mapping the World of Harry Potter, and I Love You Phillip Morris. While I’ve put some books on request at the public library near my college to pick up today, I’ve been glancing at my TBR pile (yes, I do have one!) in my closet. We’ll see how that turns out…

Tor/Forge is giving away a Sisterhood of Dune bundle until December 9th; you need to sign up for their newsletter. The Baen Free Library is full of free downloads, including The Shadow of the Lion and On Basilisk Station. Night Shade Books is offering Butcher Bird and Grey as free downloads at the moment. Vertigo Comics is offering free downloads of the first issue of several series, including Fables, The Unwritten, and Y: The Last Man. (And you will go download The Unwritten.) Small Beer Press offers several of their books as free downloads, including Kelly Link’s Magic for Beginners. If I’ve missed your giveaway or freebie, drop me a line!