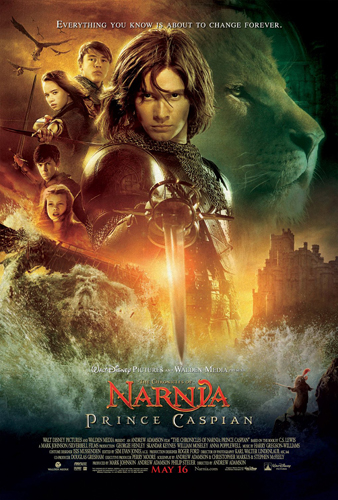 While I did see The Lion, the Witch, and the Wardrobe in theaters with my brother and his future wife when I was fourteen, I barely remember Prince Caspian being released in 2008. I do, however, remember some girls cooing over Ben Barnes that year, so… there’s that? But I never saw it until I caught it on television a while back, but I didn’t want to review it until I saw the actual theatrical cut, since there were some bits and pieces that didn’t make sense. Unfortunately, none of that improved upon watching the DVD, but I still enjoyed myself.

Prince Caspian finds the Pevensies, who are settling awkwardly (or barely) back into life in wartime England, called back into Narnia to aid the titular Prince Caspian, the fugitive heir to the throne. But Narnia is very different from what they knew; hundreds of years has passed, and Narnia has been conquered by the Telmarines. Despite being a Telmarine himself, Caspian—and the Pevensies—spearhead a rebellion to not only put Caspian on the throne, but to restore Narnia to the Narnians. But friction within the rebellion and Caspian’s scheming uncle, Miraz, might tear them apart…

Adam Adamson’s adaptation does two contradictory things—it both streamlines the story by running the Pevensies’ return to Narnia and Caspian ending up with the Narnians as parallel stories, and expands it by adding a failed siege of Miraz’s castle. It’s also remarkably dark, which I ultimately appreciated, although the enormous body count gave me pause. What Lewis himself glosses over—the consequences of having grown to successful and fulfilling adulthood in Narnia and being forced to return to childhood in England—are addressed here. There’s the larger issues such as Peter having a difficult time adjusting back to England and back to a leadership role in Narnia that puts him under Caspian, but there are smaller moments, like when Lucy picks up a gown of hers and remarks how tall she was. For someone who was a bit taken aback by how cavalierly Lewis treated this issue, I was delighted to see it addressed. The siege doesn’t bug me; it pads out the pretty thin source material, allows Caspian to confront Miraz, and shows how Peter and Caspian must learn to work together. But it is very dark, since it doesn’t fail in retreat, but instead in massacre—Peter has to abandon his troops and the film then treats us to loving shots of the corpses and the dying. I have no idea how this film earned a PG rating. It’s a far cry from the light novel it’s actually based on, but I have to say that I ultimately like it better; it takes itself seriously and isn’t afraid to follow through with the consequences, although it can sometimes feel self-indulgent.

The kids playing the Pevensie children remain as well-cast and lovely as they were in The Lion, the Witch, and the Wardrobe—Peter Moseley’s Peter is more arrogant, due to his time in England, but still ultimately a good-hearted man and a fantastic older brother to Lucy. Georgie Henley’s Lucy is still adorable, but her faith is tested in this story, when her siblings don’t believe her when she sees Aslan. Skandar Keynes is a little more low-key here than he was in the last film, but, like Peter, it makes sense—Edmund’s coping mechanism was just not drawing any attention to himself, although he jumps into a fight to defend Peter without a second thought. Anna Popplewell’s Susan is struggling with growing up and finding Narnia again when she’d just gotten used to England; it’s an interesting take on the character and foreshadows Susan’s ultimate fate. The big addition to the cast is Ben Barnes’ Caspian, who is charming, not exactly that bright (but good-hearted), and earnest. While watching it the second time around was a bit trying (the viewings were too close together), Caspian was fun and engaging to watch. The rest of the cast is solid, but Peter Dinklage’s dour Trumpkin and Sergio Castellitto’s scheming and brilliantly bad Miraz are of particular note.

But I think my favorite thing about Prince Caspian is the art direction and general design for the Telmarines. This particular film series has already established a unique flavor for Narnia, and I was blown away by what it did for the Telmarines, who are almost wholly Spanish. In some scenes where it focuses solely on the Telmarines, it feels like an adaptation of a Guy Gavriel Kay novel inspired by medieval Spain. Fantasy films tend to opt for the generic fantasy unless they’ve got scads of original worldbuilding like Tolkien—imagine how tempting it must be to phone it in for Narnia, which has very little consistent worldbuilding. But instead, this production created a visually unique fantasy film by using this Spanish influence to the hilt; alas, it’s ultimately removed in favor of a more traditional fantasy setting (although Narnia is distinctive, it’s still cut from more or less the same cloth as most fantasy films) that we see in The Voyage of the Dawn Treader. But if you want some dark and unique-looking fantasy to watch, Prince Caspian is a surprisingly good choice.

Bottom line: Prince Caspian takes remarkable liberties with the pretty thin source material, but by making it dark (how does this have a PG rating?) and visually unique (with the Spanish Telmarines), it’s ultimately a very interesting take on the Lewis novel. Worth a watch.