Thor
based on characters by Stan Lee, Larry Lieber, and Jack Kirby 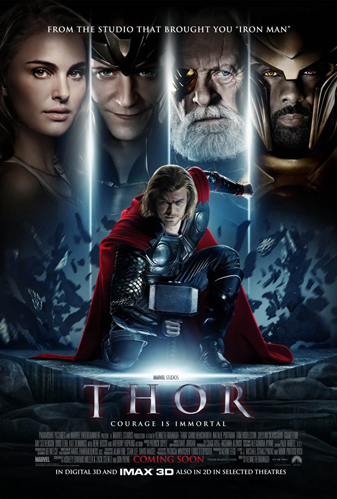 When it comes to comics, I’m a DC girl. There’s a snarky edge to Marvel that I don’t appreciate—in comic book form. When it comes to the movies, I quite like Marvel’s output. …well, their recent output. Iron Man was a fantastic romp and I quite liked The Incredible Hulk; but then, my thing for Liv Tyler probably had something to do with that. But I wasn’t exactly planning on seeing Thor until a friend of mine saw it three times when it came out. And then the trailer, where Thor behaves as if he’s at a mead hall in a tiny diner, grew on me and grew on me, until I jumped at the chance to see it on the big screen.

Thor tells the story of, well, Thor. What the Norse worshiped as gods were actually beings from another universe, who saved Earth from an invasion of Frost Giants, before returning to their home realm of Asgard. Brothers Thor and Loki are next in line for the throne, currently held by their father, Odin. When a surprise attack by Frost Giants ruin Thor’s coronation, Thor travels to Jotunheim to destroy them all, demolishing the careful balance his father has made. For his troubles, Thor is banished to Midgard—Earth. Thor must adjust to being a mortal and learning his lesson, but when his father falls ill and Loki takes the throne, the situation with the Frost Giants becomes very, very troubled…

I know very little about Thor’s particular mythos—again, I prefer DC when it comes to playing teams. I do know it’s complex and loosely based on Norse mythology; when I asked a friend who loves both comic books and Norse mythology if she was going to go see it, she declined, citing how it screws around with the mythology. But I think the screenwriters did a very good job of streamlining things, and actually using the love interest’s personal story to explain things—there’s a very sweet scene where Thor explains the basic concept of the universe as he knows it to, and it makes sense. The snarky references to other properties (which include shout-outs to Mark Ruffalo’s Hulk and, of course, Tony Stark) are integrated well and are fairly low key. No pun intended. The sparse setting of a tiny town in New Mexico helps with this; ultimately, it’s about Thor learning to be a well-rounded human being by being more than just a brutal, Frost Giant-killing machine. Interestingly, Loki’s descent in villainy is the converse—ever the silver-tongued, thoughtful, and subtle, he learns to be more violent and brutal, although we’re never quite sure if his intentions are wholly bad or wholly good. Their dichotomy is a really interesting one, and one that I hadn’t expected from this film.

The casting is full of solid but predictable choices—the two standouts are Tom Hiddleston as Loki and Natalie Portman as Dr. Jane Foster. Again, I know nothing about Loki in the comics, but Hiddleston’s Loki is sly, cunning, and mysterious; just when I was starting to sigh over his story arc’s predictability, there’s a twist that made me cheer. There’s a fantastic scene early on when Loki tells Thor that he agrees that they should go bomb the Frost Giants to hell and back… and immediately starts backpedaling when he sees he’s convinced his brother to go and do it. Did he actually mean to? Was he just trying to sooth his brother’s feelings and he accidentally gets people to do stuff like that all the time? I love the fact that we don’t know exactly what he’s up to, which is certainly fitting for the Norse god he’s based on. (And the fact that Hiddleston’s Loki looks like an evil Johnny Weir is just icing on the cake.) I was delighted to see Portman as not only a scientist, but a damn good one; she actually has a story arc of her own independent of being a love interest, which is ultimately discovering the gateways between the realms and working with S.H.I.E.L.D. Chris Hemsworth is a fine Thor (though I wish he had better hair in this picture); he’s got the ridiculous musculature for it, as well as an affable charm that wouldn’t be out of place in a period piece. The two have an earnest chemistry with each other that’s understated. I quite liked it. The rest—including Foster’s thoughtful mentor Stellan Skarsgård—do well, but don’t distract from the material.

I will say that I thought the special effects were particularly heavy in this film. It may even be more jarring since the film opens with Foster hitting Thor with her car during a whirlwind in our world, and then flashes back to baby!Thor and the events that led to Thor’s expulsion. Obviously, there’s not many ways you could create Asgard and the world of the Frost Giants, but there are some shots that just feel… flimsy. Epic in scope, but no human weight, you know what I mean? They’re not deal breakers by any means, but there was room for improvement, dazzling as they are. To be fair, this movie gets enormous points for the shot of Asgard that ends up flipping the camera over the main city; I love stuff like that. Other than the special effects, it’s a good-looking movie with its own unique visual signature in the Marvel film universe, mostly due to the selection of New Mexico as the main setting in our world. The costume design is unobtrusive but pragmatic, translating designs that might be best left on the page into some gorgeous pieces—Loki’s horned helmet, in particular, could really suck, but the costuming department really made it work.

Bottom line: Thor is ultimately a solid depiction of the superhero on the big screen—it’s good and certainly watchable, but it’s not going to blow your mind. Well, Hiddleston’s fantastic Loki might and the special effects are certainly trying to, but it’s still not at one hundred percent. But if you like superhero movies or just want to see what Branagh is up to these days, it’s definitely worth a shot.

I saw this movie in theaters.