The Other Boleyn Girl
by Philippa Gregory 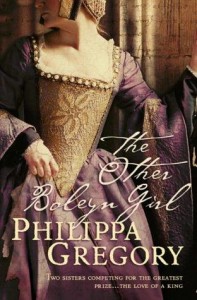 I picked up The Other Boleyn Girl, not because it was on my To Read List (it is not), but because it’s been floating out in the pop culture conscience for about a year or so. It’s certainly an interesting topic, and, most importantly, it was one of the only popular novels my college library offers. I am currently too lazy to go to the local library.

I’m quite glad I did–it’s marvelous.

The Other Boleyn Girl is the story of Mary Boleyn, sister to the infamous Anne Boleyn. Subject to the games of her scheming family (most particularly her Uncle Howard), sweet and young Mary is offered to King Henry on a silver platter when she catches his eye. Despite his love for his queen, Katherine, Henry is desperately in need of a son. Although the affair is quite productive, her ambitious and infinitely more clever sister Anne catches Henry’s eye while Mary is recovering from childbirth, and her ambition leads her to begin a very dangerous game, a game that will end with Anne on the throne, the Church overthrown, and a good wife and queen disposed.

Mary and Anne are perfect foils for each other. Mary is astonishingly young when she starts her affair with the king (she is only fourteen years old), and is, understandably, over the moon for him. Anne’s sniping and clever remarks keep the young Mary from becoming too cloying to the reader. This continues as Mary grows into a earnest woman disgusted by the claustrophobic courtly life, and Anne’s ambition forces her to play the part of the prettiest, wittiest, and brightest lady at court. When one girl’s star rises, the other is forced to wait upon the other. There’s a wonderful stretch where Anne is driven to the point of exhaustion trying to be the best at court and catching Henry’s eye, and Mary watches the circles under her sister’s eyes grow darker and darker. The Boleyn siblings–Mary, Anne, and George–are realistically portrayed, warts and all, as is Henry VIII, especially towards the end. The only completely good character in the novel is William Stafford, Mary’s second and beloved husband.

Anne’s ruthlessness is a product of the Boleyn family and their kin, the Howards, forever scheming to get to the throne via their family’s veritable stable of young girls. Mary, mercifully, has avoided much of that, being merely a pawn. The novel is written from Mary’s perspective, and this lack of ruthlessness allows her to be vastly more sympathetic than Anne and their brother, George. I found Mary’s narration quite interesting, watching her grow from young girl to mother, forever being shocked at her ages at each stage of life (she has two kids by twenty-two). As she grows older and falls out of the king’s favor, she begins to break away from the court, culminating in a magnificent three-day ride to escape the court and marry the man she truly loves, William Stafford, a humble horse master. Oh, I cheered for her.

I was absolutely shocked to learn that a great deal of Philippa Gregory’s story has a basis, if a somewhat shaky basis, in fact. Of course, there’s the delicious irony of Anne wailing about Mary’s ascension in the court, and the lengths she goes to marry Henry and produce an heir. And what lengths! It’s a form of suspense, watching what lows Anne will sink to to produce a male child. I was almost on the edge of my seat, until I remembered what happened historically.

The level of detail is marvelous. The sheer amount of research Gregory has done seems amazing–she describes her process in a little Q&A in the back of the novel, and it’s staggering. This helps the novel feel more realistic. I, for one, have learned more than I ever thought possible about medieval birthing techniques and sexual terminology.

It’s not perfect, of course. Gregory has a habit of stringing two sentences together with a comma, which rubs me the wrong way, and it can be a bit hard to keep up with the various nobility at court, especially George’s group of friends. Still, it hardly tarnishes this wonderful and remarkably accessible novel. Art, it’s not. But deliciously decadent historical fiction? That, my friends, it definitely is.

Bottom line: A thoroughly satisfying and remarkably suspenseful historical novel about a forgotten mistress to Henry VIII and a forgotten sister to Anne Boleyn, who provides an intriguing vantage point to the whole Boleyn affair.

7 thoughts on “Review: The Other Boleyn Girl”