Dark secrets and a mother rescuing her son in steampunk Seattle feature this week on The Literary Horizon.
Brodeck, by Philippe Claudel

From what I believe is the product description and is, at the very least, Powell’s Books’ description: “Forced into a brutal concentration camp during a great war, Brodeck returns to his village at the war’s end and takes up his old job of writing reports for a governmental bureau. One day a stranger comes to live in the village. His odd manner and habits arouse suspicions: his speech is formal, he takes long, solitary walks, and although he is unfailingly friendly and polite, he reveals nothing about himself. When the stranger produces drawings of the village and its inhabitants that are both unflattering and insightful, the villagers murder him. The authorities who witnessed the killing tell Brodeck to write a report that is essentially a whitewash of the incident. As Brodeck writes the official account, he sets down his version of the truth in a separate, parallel narrative. In measured, evocative prose, he weaves into the story of the stranger his own painful history and the dark secrets the villagers vigilantly keep hidden. Set in an unnamed time and place, BRODECK blends the familiar and unfamiliar, myth and history, into a work of extraordinary power and resonance.”

I find the concept for this novel fascinating–two parallel accounts of a murder committed by a whole town. Not only is there the interest of the murder itself, but what will Brodeck do with the real account and the forged account? I’m curious as to how the vagueness of the “great war” will play out–it’s obviously a Holocaust reference, but can Claudel successfully use it in this vague manner? There’s also the mythic nature of the novel, due to the vagueness and the simple plot. It intrigues me.

Philippe Claudel is a celebrated French novelist, and the writer of the film I’ve Loved You So Long. This is his third work to appear in English. Reviews are nearly all glowing, although the San Francisco Chronicle feels it’s a bit too derivative of Kafka, and finds its attempt to treat the Holocaust vaguely suffers. I’m still definitely going to read it.

Brodeck was released on June 23. 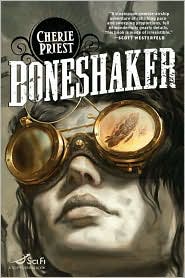 From the product description: “In the early days of the Civil War, rumors of gold in the frozen Klondike brought hordes of newcomers to the Pacific Northwest. Anxious to compete, Russian prospectors commissioned inventor Leviticus Blue to create a great machine that could mine through Alaska’s ice. Thus was Dr. Blue’s Incredible Bone-Shaking Drill Engine born. But on its first test run the Boneshaker went terribly awry, destroying several blocks of downtown Seattle and unearthing a subterranean vein of blight gas that turned anyone who breathed it into the living dead. Now it is sixteen years later, and a wall has been built to enclose the devastated and toxic city. Just beyond it lives Blue’s widow, Briar Wilkes. Life is hard with a ruined reputation and a teenaged boy to support, but she and Ezekiel are managing. Until Ezekiel undertakes a secret crusade to rewrite history.His quest will take him under the wall and into a city teeming with ravenous undead, air pirates, criminal overlords, and heavily armed refugees. And only Briar can bring him out alive.”

I’m particularly fond of any story where a mother searches for her child against a fantastical background. I was first introduced to it in an article about sexism in World of Warcraft, where a player spoke about her character’s roleplay–a middle-aged mother searching for her kidnapped children. Ever since then, I’ve found it interesting. I think it’s a marvelous way for a young adult book to focus on an older female character instead of a character roughly of the same age as the audience. According to early reviews, Briar Wilkes kicks some serious ass.

The steampunk and alternate history aspect of it also interests me, especially since Priest appears to be gearing up to flesh out the universe beyond one novel–it has its own website, The Clockwork Century. You can read a story set in The Clockwork Century here at Subterranean Press. I haven’t had a chance to read it yet, but it ought to give you a taste of the world and Priest’s writing. There’s also the mystery aspect of what exactly is going on in devastated Seattle, which sounds intriguing.

Boneshaker will be released on September 29–next Tuesday!