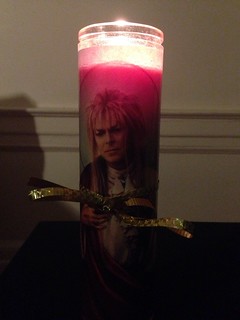 If there was ever a week to light this candle, this was it.

David Bowie passed away on Monday night. He wasn’t as big a part of my life as he was for many, but still—my apartment is named the Church of Bowie. I had never even considered the notion that he was mortal like myself.

Aja Romano talks about the “Boba Fett is a lesbian” meme and the joys of transformative fandom. (I really loved the bit about how fans recontextualize and destabilize tropes, actually giving them new life through reinterpretation.)

Anne Helen Petersen’s look at The Hateful Eight and The Revenant in the context of the film industry’s history of trying to get butts in seats is, unsurprisingly, great.

The Golden Globes were held on Sunday, so you know what that means—the first of Genevieve Valentine’s Red Carpet Rundowns for this award season. We are very lucky cats and kittens.

The shortlist of actors for the upcoming Young Han Solo movie is… uninspiring. Jennifer Lawrence is the only person I can conceive of playing young Han Solo (cute + capable + grumpy + snarky, DONE), but she’s not going to be cast.

Casey Plett stops by The Walrus to discuss her feelings on The Danish Girl. Unfortunately, you also have to read The Walrus editor Jonathan Kay’s very ciscentric thoughts on the film as well, but good on Kay for actually inviting Plett to come and talk about the film.

Jamie Foxx will play Little John in Robin Hood: Origins? SIGN ME UP.

Married couple Kate Elazegui and Emily Kehe were both pregnant at the same time, and talk about their experiences. It’s really fascinating and raw, especially about some of the emotional logistics of motherhood.

After the Angoulême International Comics Festival claimed that the reason there were no women on its long list for its prestigious award was because they couldn’t rewrite comics history, Laurenn McCubbin dropped by the Guardian to explain why that was so screamingly dumb.

At the Awl, Rachel P. Kreiter evaluates the Metropolitan Museum of Art’s Ancient Egypt Transformed: The Middle Kingdom. She touches on how ancient Egypt has been commercialized and how ancient Egyptians really didn’t conceive of art the way we do—their closest word for it actually connotes something like “craft.” I really appreciated the latter.

Hey, the 2016 Amelia Bloomer Project List, an annual list of the best feminist books for kiddos zero through eighteen, is out!

Here’s how to build a creative practice.

This ten minute long VFX reel for Star Wars: The Force Awakens is great—I especially like that they use picture-in-picture to show the raw shot and label what the effect in question is. I also may have totally cried when I saw that shot of Nyong’o performing Maz’s conversation with Rey with a taller performer dressed as Rey to help her.

The Chronicles of Narnia are… rebooting? Um, why?

Alan Rickman passed away this week. His career was, obviously, fantastic (and started at forty-one, if you’d like to be inspired), but he will largely be remembered for how he managed to turn Severus Snape into a palatable, memorable character.

Here’s a lifelong Republican talking about why he would never vote for Trump and how Trump is damaging political discourse in America.

There’s going to be a Poe Dameron comic come April! Aw, Marvel, you didn’t have to get me anything for my birthday, but you did!

The Internet Archive has just added over two thousand MS-DOS games to its archives, which you can play in browser. You will do little else this weekend.

Carol may have been snubbed at the Oscars because it’s a film that doesn’t care about the male gaze—or even men.

At Buzzfeed, Katie J. M. Baker covers how female comedians are standing up against harassment and sexual assault in their community—by word of mouth.

This Slate article has a very bait-y title, but it’s ultimately about how Hillary Clinton’s professional wardrobe can be read as queer in that it does not cater to the male gaze, which is kind of an interesting thought.

At The Houston Press, Jef Rouner talks about how capital G gamers have started behaving like the religious right.

Andrea Phillips talks about how to mimic the rewards of Clarion without going to Clarion. It’s a good resource for writers in any genre who might not find that a writing workshop works for them.

Rowan Blanchard, star of Girl Meets World, came out as queer on Twitter this week! One of us! One of us! I’m really heartened to see that a fourteen year old feels comfortable coming out as queer—I remember being that age and being told that I couldn’t possibly know because I was too young/stupid/having a phase. (Joke’s on them, my thing for Liv Tyler is eternal.) Welcome and shine on, Ms. Blanchard!