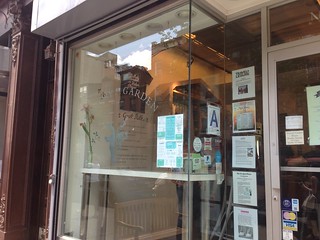 Pictured above: an ice cream shop I can actually eat at, since it serves goat milk ice cream. I had the salted caramel and it was heavenly.

I saw Mad Max: Fury Road on Friday, which required a three hour mental rest, because that movie blew my brains out in the best way possible. I’m still reeling, but will have it together enough for a review tomorrow. I also read The Life-Changing Magic of Tidying Up yesterday, before tackling my closet with a ruthlessness I’m pretty sure is inherently opposed to the KonMari way. Still, my closet is clear, my drawers are organized, and I finally framed and hung up the insert from Billy Idol’s Rebel Yell album.

At The Los Angeles Review of Books, Robert Tally Jr. considers Galadriel and Tolkien’s elves as inherently opposed to change.

Doctor Bifrost talks about Wonder Woman and how her unique, lady-focused origin story has been rewritten to adhere to the Paternal Narrative common to every other superhero at the Mary Sue.

According to Chris Pratt, that rumor about a dude Ghostbusters movie featuring him and Channing Tatum is total bunk. Whew.

Here’s our first look at Rob Kazinsky as Orgrim in Duncan Jones’ Warcraft.

After what’s happened on Game of Thrones recently, the Mary Sue has decided to cease coverage of the franchise. It’s a bold move. I hate that they felt moved to do so (to be clear, that the show did what it did, not that they had that reaction), but I’m proud that they were brave enough to make this decision.

In an interview with the Radio Times, Simon Pegg implied that geek culture is dumbing down mainstream culture. Ryan Britt at Tor.com lists five mature aspects of speculative fiction in response. Pegg posted a response on his own website, apologizing for how it was said, embracing geek culture, and double-downing on the idea that we should reevaluate geekdom every once in a while. Still… it’s a side-eye inducing situation.

Fire up the Doof Wagon, here’s everything I read and loved about Mad Max: Fury Road this weekend:

At Grantland, Hazel Cills explains why the new Jem and the Holograms movie completely misses the mark, despite the original series having basically predicted Vocaloids.

Jonathan Krisel and Graham Wagner of Portlandia are adapting Mermaids in Paradise into a film! I literally just rented this from the library, so I’m excited.

The Lonely Island’s next film project, Conner4real, will also include the talents of Tim Meadows. I adore Tim Meadows and am pleased by this.

At BuzzFeed, Syreeta McFadden talks about how her gap-toothed smile serves as an anchor to both her father and to her lost African heritage as an African-American woman.

The Mary Sue (en masse, it appears) call for a change in how sexual assault is depicted in the media—namely, that it’s usually used for attention and the long aftermath of recovering from sexual assault is rarely, if ever, shown.

Hey, did you know that the Girl Scouts of America welcome trans girls into their ranks? That’s awesome!

Director Peter Greenaway’s next project is a biopic of Alexandre Dumas, centering on the two years he lived in Russia.

Films
Purchased: None
Added: Pirates (via tumblr), Glengarry Glen Ross (via the Dissolve),