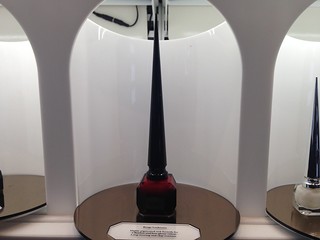 The only thing of note from this largely pleasant (IF FREEZING COLD) week is that I bought a black cowl neck “hoodie” situation for eight dollars and now refuse to take it off so I can be Emperor Palpatine. I also went to go see The Hobbit: The Battle of the Five Armies which… well, it led to me discovering that Young Hercules is available in its entirety on Hulu, so that’s a plus. Sigh.

Will Forte returns to our screens as The Last Man on Earth. I hope, as ever, that it is just Forte shuffling around an abandoned Los Angeles for an entire reason while alternately looking sad and screaming.

At The New York Times, Brook Larmer talks about the history and pressures of the most competitive and single-minded test-prep school in China.

Hi there, shy, nerdy boys. Your suffering was and is real. I really fucking hope that it got better, or at least is getting better, At the same time, I want you to understand that that very real suffering does not cancel out male privilege, or make it somehow alright. Privilege doesn’t mean you don’t suffer, which, I know, totally blows.

The historic but dilapidated Harlem Renaissance Ballroom (or the Renny) is being scheduled for destruction. Go sign this petition to put a stop to it.

Autostraddle has released its 2015 State of the Queer Lady Television Union. Things are looking more up than down these days.

This Vice article by Molly Crabapple about the legal persecution of sex workers is eye-opening:

To Lee and Kluger, the willing sex worker is either fictional or self-deluding. They prefer the term “prostituted woman.”

According to Kluger, the HTICs are decriminalizing prostitution in the court system, despite the arrests and incarcerations that underpin the courts. Her perception of sex workers comes from the women who have stood before her bench. To her, they seem “comatose,” emotionless, controlled by traffickers and pimps. To validate their emotions, Lee and Kluger both rely on long-discredited statistics that are mantras in the anti-trafficking world: “70 percent of trafficking is sex trafficking”; “the average age of entry into prostitution is 12 to 14 years old.”

When asked, neither could cite their sources.

But even if you believed all prostitutes were raped and trafficked women, the way police treat them makes about as much sense as arresting battered wives.

NBCUniversal is hosting its second annual Late Night Writers’ Workshop, and the workshop is specifically soliciting female writers and others from diverse backgrounds to apply. The deadline is January 14th, so what are you waiting for?

This is a Finnish movie about hunting the President of the United States, played by Samuel L. Jackson. This is amazing.

If you’ve never seen yourself or people like you in a story before, you have to imagine them out of nothing. This might sound like the very definition of imagination, but imagination is bounded by culture and belief systems and iterations upon iterations of stories already told. It requires a giant symbolic leap to imagine a story that breaks the mold of what’s already out there.

The Hairpin’s new Casting Couch column recasts classic Hollywood movies. Its inaugural post recasts Ocean’s Eleven with ladies. Every choice is better than the next, and it starts with Jennifer Lopez playing Dani Ocean. GENIUS.

An NAACP Office in Colorado Springs was bombed this week; thankfully, no one was injured. But the idea that someone would respond to the NAACP with bombing in 2015? I’m sickened.

In the wake of the tragic murders of several staff members of French satirical newspaper Charlie Hebdo by gunmen, Jacobin braces itself for the Islamophobic backlash that’s already brewing. Scott Long at a paper bird looks at satire, Voltaire, and power in the wake of the murders:

We’ve heard a lot about satire in the last couple of days. We’ve heard that satire shouldn’t cause offense because it’s a weapon of the weak: “Satire-writers always point out the foibles and fables of those higher up the food chain.” And we’ve heard that if the satire aims at everybody, those forays into racism, Islamophobia, and anti-Semitism can be excused away. Charlie Hebdo “has been a continual celebration of the freedom to make fun of everyone and everything….it practiced a freewheeling, dyspeptic satire without clear ideological lines.” Of course, satire that attacks any and all targets is by definition not just targeting the top of the food chain. “The law, in its majestic equality, forbids the rich as well as the poor to sleep under bridges,” Anatole France wrote; satire that wounds both the powerful and the weak does so with different effect. Saying the President of the Republic is a randy satyr is not the same as accusing nameless Muslim immigrants of bestiality. What merely annoys the one may deepen the other’s systematic oppression. To defend satire because it’s indiscriminate is to admit that it discriminates against the defenseless.

And just a reminder—that famous Voltaire quote about defending your right to say something he disagrees with? Written by Beatrice Evelyn Hall.

I had no idea The Price of Salt was coming to theaters this year with Cate Blanchett and Rooney Mara. SCREAM.

I don’t listen to the Nerdist Podcast as religiously as I used to (the spot in my heart that for some reason requires a trio of straight white dudes who are friends and also funny is currently occupied by The Flop House), but this interview with Andrea Romano, a legendary voice director and casting director, is really fascinating. Her career is astonishing in its breadth, she talks a lot about the unique art of voice acting, and touches on personal satisfaction. (But before you send this to the kids in your life, Chris swears his usual amount on the podcast.)

Ian McKellen upstaging you is perhaps the best idea for a music video ever.

Lifehacker discusses how to boost your observational skills. I’ve been trying to avoid to become the kind of public transportation commuter who loathes her commute, and this was really helpful. Also, soundwalks—where you identify and investigate sound origins—sound AMAZING.

DC has announced the new Power Girl—Tanya Spears—will be joining the Teen Titans soon. She seems like their answer to Kamala Khan, as she is also a young lady of color as well as a legacy, so here’s hoping it goes great.

Here’s an example from my own life: In one of the episodes from the first season (I think it’s 109), our storyboard artists drew a gag where a big droopy dog is standing on a street corner next to a businessman and the wind from a passing car blows the dog’s tongue and slobber onto the man’s face. When Lisa designed the characters she made both the dog and the businessperson women.

My first gut reaction to the designs was, “This feels weird.” I said to Lisa, “I feel like these characters should be guys.” She said, “Why?” I thought about it for a little bit, realized I didn’t have a good reason, and went back to her and said, “You’re right, let’s make them ladies.”

I am embarrassed to admit this conversation has happened between Lisa and me multiple times, about multiple characters.

The thinking comes from a place that the cleanest version of a joke has as few pieces as possible. For the dog joke, you have the thing where the tongue slobbers all over the businessperson, but if you also have a thing where both of them ladies, then that’s an additional thing and it muddies up the joke. The audience will think, “Why are those characters female? Is that part of the joke?” The underlying assumption there is that the default mode for any character is male, so to make the characters female is an additional detail on top of that. In case I’m not being a hundred percent clear, this thinking is stupid and wrong and self-perpetuating unless you actively work against it, and I’m proud to say I mostly don’t think this way anymore. Sometimes I still do, because this kind of stuff is baked into us by years of consuming media, but usually I’m able (with some help) to take a step back and not think this way, and one of the things I love about working with Lisa is she challenges these instincts in me.

This bizarre cover of Journey’s “Open Arms” with Sing-a-ma-jigs is so… soothing to me. This should probably be what I link people to to indicate my musical taste.

Books
Purchased: None
Added: Silver Screen Fiend by Patton Oswalt (via The AV Club), The Price of Salt by Patricia Highsmith (via Autostraddle)