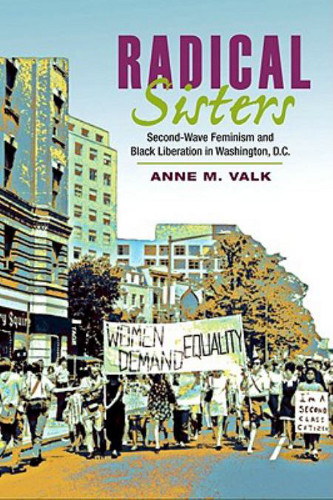 While it would be dishonest of me to say that I am utterly loving my women’s history class, I am quite enjoying learning about second-wave feminism. Through my exploration of music and film, I’m starting to get a better handle on the sixties and seventies. (Slate is helping this along, what with their recreation of the Beatles’ career in real time, bless them.) Getting a handle on the politics, especially the politics that directly relate to and result in me, is just another way to understand the recent past. So my final paper for the class naturally focuses on second-wave feminism.

Radical Sisters is a history of second-wave feminism in Washington D. C., focusing on how political movements of the 1960s—welfare activism, civil rights, to name just two—influenced and inspired grassroots feminism in America’s capital, with a focus on the contributions of African-American women. Author Anne M. Valk shows how race and class often divided feminists, but also how separate movements in feminism and other civil right groups influenced each other as feminism learned that action on specific issues united more readily than, say, radical ideology.

My final paper for this class is being framed as a perspectives paper; essentially, exploring a topic in women’s history by focusing on two groups that disagree with each other. When I initially conceived of the paper, I wanted to focus on othering in second-wave feminism. Namely, how white feminists reacted to black feminists, lesbian feminists, and black lesbian feminists. In reading Radical Sisters, I’ve decided to narrow my focus down to white feminists and black feminists. This is partly because it’s the end of the semester and I need to get realistic about how much work I can feasibly get down in the next three weeks (SCREAM!), but mostly it’s because it’s utterly fascinating.

Valk opens Radical Sisters (after a thorough introduction) by discussing Mary Treadwell, who began her activist career in the civil rights movement, joining the Student Nonviolent Coordinating Committee in 1966. A lot, if not all, of the chapters open like this; as Radical Sisters is an incredibly brief history, clocking in at one hundred and eighty six pages, it’s nice to have some faces to follow and keep it from getting too dry. In any case, Valk starts in the thick of the civil rights movement in order to make a point about black feminists and politically active black women; most of them started out in the civil rights movement, learning important skills and working side by side with men. Of course, these organizations weren’t free of sexism; far from it. For instance, even the overturning of curfews at Howard University, which kept college women from attending meetings and organizing events, came with a heavy whiff of the idea that female bodies should be available to men. But the goal of racial equality, for a lot of women involved, was more important.

And that’s the tension that ran between black and white feminists until the movement could successfully incorporate other concerns (as Valk argues; whether or not feminism has done so is, of course, up to you). White feminists, many of them getting involved in activist work for the first time (although there are a few white feminists who worked in the civil rights movement and went onto use their skills as feminism picked up speed), alienated black feminists by focusing on almost solely middle-class concerns. And when certain groups took a turn for the ideological, such as lesbian feminists the Feminists, who rejected men, black feminists found it difficult to reconcile the idea of men oppressing women with the idea of white people oppressing black people. (I realize that’s a very vague way to put it.) Faced with the moderates who would work alongside men but didn’t speak to the needs of black women and the needs of low income women on the one hand and the radicals on the other, black feminism had to be created from within, especially as the sexism of black liberation continued.

This is not, of course, to say that there was white feminism and there was black feminism. There’s nothing so pat, and that’s barely scratching the surface of Radical Sisters; as Valk argues, black and white feminists came together on issues, if not always in ideology. That’s just what I’m attuned to, since this was for research. Despite its short length, it can be dry, but as a primer to second-wave feminism through the lens of the involvement of black women, it’s quite useful.

Bottom line: A short, if dry, primer to second-wave feminism through the lens of the involvement of black women. Useful.