The Blacker the Berry by Wallace Thurman 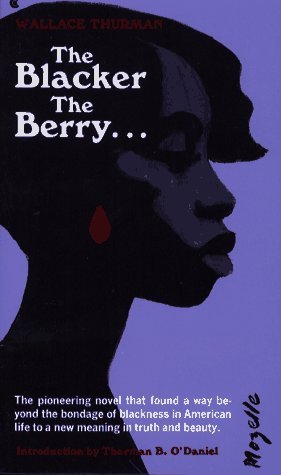 One of the things I’m really enjoying about my African-American novel class is discovering writers wholly new to me, which Harlem Renaissance writer Wallace Thurman definitely qualifies as. Our professor likes to give us a little biographical context for the authors we read, and he particularly illustrated Thurman’s life with some clips from Brother to Brother, dramatizing his experiences with colorism (Thurman was very dark), his discontent with the main black establishment (he thought they were spending too much time trying to impress whites rather than generating art), and his homosexuality. Thurman died young of tubercolisis, but he left behind several novels, including The Blacker the Berry.

The Blacker the Berry follows Emma Lou Morgan, an African-American girl from Boise, Idaho, in the 1920s. Emma Lou is the darkest-skinned girl she knows, something that upsets her light-skinned family and the rest of the community, which looks down at her for being so dark. After graduating high school, Emma Lou gratefully travels to UCLA, eager to make friends with the “right kind” of black people, but finds herself barred from sororities and social situations for her skin color. When she’s thrown over during a summer romance, Emma Lou blames her skin color and decides to drop out of school and move to Harlem. But colorism, as well as Emma Lou’s hypersensitive defense mechanism, continues to dog her.

Our recent readings in this class—Autobiography of an Ex-Coloured Man and Passing, respectively—shared an unreliable narrator, and so does The Blacker the Berry. Because it’s written in the third person, however, it’s clear to the reader when Emma Lou is hypocritical or misunderstands. (Passing is also written in the third person, but it’s so much more personal and focused on Irene; it never steps out of her, as it does here with Emma Lou.) Here, Thurman is probing colorism and what it does to a person. Emma Lou suffers actual discrimination based on her skin, of course, but Thurman is much more interested about what it does to her outlook. Emma Lou is hypersensitive about her color, assuming it ended her summer romance (when it was simply her suitor moving away) and, at one point, assuming that a joke made onstage during a show about dark-skinned girls means that everyone is staring at her and mocking her.

She’d probably be easier to sympathize with if she wasn’t so incredibly classist and colorist herself. As soon as she steps foot at UCLA, she nervously fails to make contact with the beautiful people she bumps into and ends up talking to Hazel, a sweet, big-hearted nouveau riche dark-skinned girl from the South, who speaks in dialect. Emma Lou is utterly ashamed at her, angry at her for being so… so… well, so black. Emma Lou not only suffers externally from colorism, but she’s internalized it. Light is better, and even as Emma Lou suffers from colorism, she inflicts it on others, treating suitors poorly because they’re too dark and hating to associate with lower-class black people as she searches for a job in Harlem. Thurman is not only advocating the concept of “black is beautiful”, but also showing how colorism can seep into your subconscious and how even those who suffer from it perpetuate it.

But setting Thurman’s thoughtful politics aside, The Blacker the Berry feels surprisingly fresh for a 1929 novel by sheer voice. Reading The Great Gatsby always makes me hyperaware of the ocean of time between myself and F. Scott Fitzgerald, but Thurman’s narrative voice is clear, straightforward, and, well, near. Emma Lou, with all her flaws and no matter how utterly unsympathetic she is, still feels like a person, even as she rationalizes herself in circles. My class was particularly shocked by how straightforward Thurman was about Emma Lou losing her virginity to her summer romance, but it’s real moments like that that anchor Emma Lou in reality. For as much as I dislike her as a person, I identified heavily with her when the narrator discussed how Emma Lou is given to dreaming up plans alone in her head and expecting the world to just catch up with her. Things like that make it more real and visceral, and make the text much more effective.

Bottom line: The Blacker the Berry is a remarkably fresh 1929 novel about the evils of colorism, especially when it seeps into your soul. If you’d like.

I bought this used book off of Amazon.

3 thoughts on “Review: The Blacker the Berry”