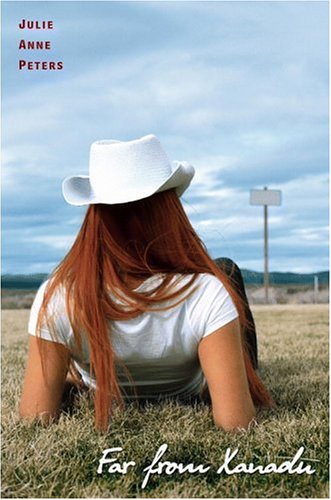 My recommendation for Far From Xanadu comes from the dearth of butch heroines in literature, let alone young adult literature. Malinda Lo recommended it on Tor.com, so I thought it was worth picking up. This is actually a harder title to come by, if only because this book actually has two titles—the original Far From Xanadu and the recent reissue under the title Pretend You Love Me. But rest assured, they’re the same book.

Far From Xanadu is set in tiny Coalton, Kansas, and follows Mike Szabo, a butch teenage girl still reeling from the suicide of her father two years previous. Her morbidly obese mother hasn’t talked to her in those two years, and her older brother Darryl has let the family plumbing business go downhill. With only softball and her catty best friend Jamie to distract her, is it any wonder Mike falls—and falls hard—for the stunningly beautiful Xanadu, a new transfer student? But there’s a problem—Xanadu is straight. As Mike struggles with her crush, her family, and her future, she must reexamine one of the fundamental elements of a human life—love.

Katie at Unravelled Threads and I have been talking about the threat of a single queer story; namely, the fact that most fictional depictions of queer folk focus on their struggle with their sexuality and their further struggle with coming out. This is an important story to tell, of course, but it’s also the loudest. It’s rare to see, especially in contemporary fiction, novels or short stories that treat alternate sexuality as a given and go on from there. (For instance, the current shining beacon for asexuals is Benedict Cumberbatch’s interpretation of Sherlock Holmes in Sherlock, whom the production explicitly labels as asexual—but even then, he develops an enormous crush on Irene Adler when she turns up. Not heterosexual per se, but certainly heteronormative.) While Mike isn’t entirely comfortable with her identity as a butch lesbian, she (and her community) don’t care that she’s attracted to girls. The worst thing thrown her way is someone assuming that she won’t want children because she’s gay. Far From Xanadu, despite what’s written on the cover flap, doesn’t concern itself with that single queer story.

Rather, Mike has plenty of things to worry about before Xanadu walks into her life. Her family life is in shambles, and her father’s suicide has left her alternately doubtful she can’t do better and too proud to accept help. It’s love in general that’s Mike’s problem—her struggles to reconnect with her family (she and her father were close) and her struggle to recognize the desire of her community to help her as love rather than pity. In fact, Mike’s unease with labeling herself probably stems from that. All of this is why Mike falls for Xanadu, who is clearly bad news (although Mike refuses to hear a word against her). Here Peters absolutely nails being in love—when Xanadu talks about what she’s looking for in a guy, Mike finds herself thinking that she could be anything for her, and she’s hyper-focused on any physical interaction they share. Xanadu doesn’t help, of course. As the novel progresses, it becomes clearer and clearer that Xanadu is playing with Mike and doesn’t understand Mike’s struggles; the two are separated not only by a sexual orientation, but by class and values. It’s only towards the end, as Mike repairs her relationships with everyone (including herself), that she sees Xanadu for who she really is.

…well, that’s quite a bit on how Far From Xanadu is useful as a novel that avoids the single queer story and focuses more on love in all its various forms, and not much on the actual novel itself. The writing is straightforward and quite readable, and Mike is a charming protagonist. (Although I’m not quite sure who the girl on the cover is supposed to be; I’ll say Xanadu because she’s a redhead.) Less successful as a character is Jamie, Mike’s male best friend who fulfills every gay stereotype you can think of. He’s important as someone to occasionally poke Mike about her unease about calling herself gay, but it would work without him—twice in the novel Mike encounters other queer women and feels camaraderie and even jealousy. (I’m not going to lie, I was kind of hoping Mike would end up with one of the girls she meets in those two instances.) She even wonders if they’re only friends because they’re both gay. Peters deconstructs this a bit—Jamie is very aware of how he presents to the world and just does not care—but he just seems to reinforce the gender binary Mike thinks in. I had been initially hoping Jamie was a girl (Peters introduces both Mike and Jamie in ways that their gender must be revealed), to contrast a female friendship with a female romantic relationship, but alas. Ultimately, it’s just alright—I probably wouldn’t pick this up if representations of butch women weren’t few and far between in young adult fiction. But they are, and Far From Xanadu is nicely complex to boot.

Bottom line: Far From Xanadu is a decent young adult novel elevated by its focus on a butch heroine (extremely rare!) and issues of love far beyond the usual coming out story so prevalent in stories focused on queer protagonists. If you’d like.

6 thoughts on “Review: Far From Xanadu”