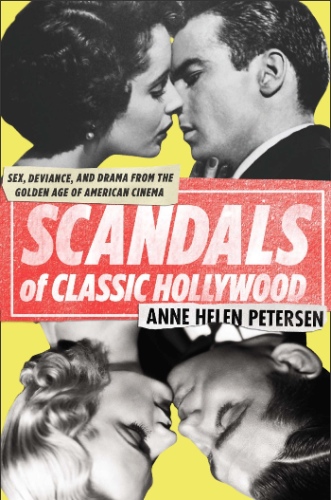 I am more than tempted to launch into a modified rendition of one of Mean Girls’ most memetic quotes (“Anne Helen Petersen… how do I begin to explain Anne Helen Petersen?”), but it will suffice it to say that Petersen is one of my favorite writers in my field of dreams, media studies. While I focus more on fandom and Petersen literally has a PhD in celebrity gossip, we’re ultimately trying to answer the same questions—what are people getting out of the narratives that they consume and what does that say about our culture at large? Or, in Petersen’s words:

I think that at any point celebrities are indicative of what matters to us at a certain moment. The images are always either acting out or trying to shore up ideologies under threat. You can look at our stars and see the things we’re trying to, as a society, figure out, in terms of femininity and masculinity and race performance and sexuality. The way we talk about celebrities is so illuminating.

Accordingly, Scandals of Classic Hollywood has been on my reading list since Petersen announced it on the Hairpin in January of 2013. I don’t remember how I first encountered the column of the same name, but it quickly became one of my favorite things online. (And it remains so. Petersen, having escaped academia to be a Features Writer at BuzzFeed, published a column about Anna May Wong yesterday. I was so over the moon that I read the entire thing out loud to Captain Cinema while she fixed herself some food.) Even if it ended up simply reprinting her columns with a little bonus content on the side, à la Hyperbole and a Half, My Year of Flops, and Tiny Beautiful Things, I just wanted to have it on the shelf.

Luckily, the book and the column are two distinct, but obviously related, creatures. It’s “ 98.7% all-new scandal”, covering celebrities she never got to in the column, and thoroughly revisiting celebrities she did. The tone remains arch but less casual—her introduction to Marlon Brando, for instance, no longer calls for us to just “Wipe your memory clean and just f-ing look at this man,” but still forces you to engage with him before he became a punchline. But it’s still funny, engaging, and witty, just slightly drier. And the book allows her to group celebrities together in order to contrast and compare them: how Judy Garland and Dorothy Dandridge were destroyed by the systems in place (studio and otherwise), or how James Dean fits into the mold provided by Marlon Brando.

Petersen sympathetically (and, in the case of Mae West, admiringly) examines their personal lives before digging deep into their images. Obviously, every celebrity requires a different approach, but it always feels of a piece and manages to make you look at our culture a little differently. Petersen’s analysis is welcomingly and necessarily inclusive, touching on race, sexuality, class, and gender and the narratives these star images perpetuate about those things. And, of course, there’s the sheer pleasure of reading about the consolidated studio machinations of classic Hollywood, something that is now in the hands of diffuse publicists. (Petersen also writes about contemporary celebrities at BuzzFeed; I refer you specifically to this astonishing piece on Angelina Jolie. Basically, I’m going to need everyone who reads this review to report back to me about which Petersen piece they read and why they liked it.)

A lot of this analysis is stuff I already have a grip on; the satisfaction is in reading the specifics, not becoming acquainted with the broad strokes. But there’s always something new to be taken away from every nonfiction experience I have, and Scandals of Classic Hollywood is no exception. For instance, the Clara Bow chapter offers insight into why people dismiss certain behaviors, dress, and styling as “trendy”: “If even the so-called super-flapper didn’t inhabit the flapper lifestyle off-screen, then flapper behaviors weren’t some new way of being—they could be put on and taken off like a new coat” (59). A dismissal of something as trendy is an attempt to dismantle its power by implying impermanency. Scandals of Classic Hollywood is full of these little insights, as well as some pretty big ones. Put simply, it’s a classic.

I bought this book at an author reading.