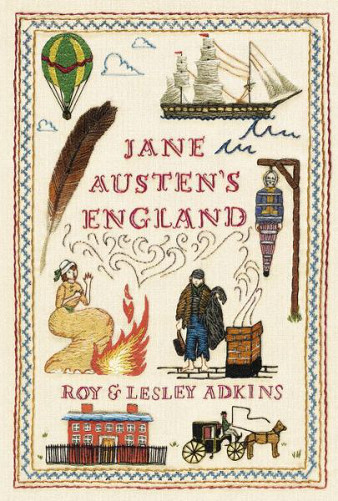 While my historical education has always been spotty, there are a few periods of history that were always pretty clearly defined for me: the ancient world (skewed towards Egypt, given my interest in Egyptian mythology), the Dark Ages, World War II, the eighties, and, of course, Regency England. But all of this came to me through highly sanitized lenses, especially when it comes to Regency England. No matter how authentic we moderns think we want our history (I’m looking at you, Robin Hood), you’d be hard pressed to find someone willing to sit through all the gory details, from the rampant smallpox scars to the cramped living conditions to the irregular teeth. That’s all well and good when I’m enjoying, for instance, a film adaptation of Emma, but less so when I’m trying to wrap my head around the actual sequence of human events.

Historians Roy and Lesley Adkins to the rescue! The husband and wife team, who have previously coauthored Nelson’s Trafalgar and The War for All the Oceans, turn their focus on life in Regency England. Specifically, Jane Austen’s England, although the strongest narrative voices in the book are the voices of James Woodforde and Ellen “Nelly” Weeton (referred to only as Nelly Weeton in the text). The book is structured along the lines of a life, starting with marriage, so important in Austen’s texts (since that was the only way women of a certain class could support themselves), continuing to children, and ending with death.

The result is a remarkably brisk and deceptively readable book—look away for a moment and you’ll probably miss one of the many, many segues into another subject buried into the middle of a paragraph. All I’m saying is that you better be paying attention. It’s absolutely crammed full of interesting details about life in Regency England. (This includes historical underwear, a subject that bewilders and fascinates me.) For instance… Regency gowns came into fashion due to a fascination with the ancient world, itself due to contemporary archeological findings! The Romantics’ interest in nature may have been influenced by the fact that nobody could travel to the Continent for fun during the Napoleonic Wars! Beethoven was alive during the Regency period! (Hey, I said I had a spotty historical education.) As a primer to the real Regency England for those of us who only know the period through the film adaptations of Austen’s work, Jane Austen’s England is quite successful.

I loved that the Adkins are especially quick to highlight the political turmoil that makes the briefest of appearances in Austen’s work. As the French and Industrial Revolutions rock Europe, England’s elite become terrified that the English class system might start crumbling. While discussing the awful conditions of the working class, the Adkins quote clergyman Johnson Grant, who advocates for kindness towards workers. His motivation, however, stems not from compassion, but from self-interest: if the oppressed can tell they’re oppressed, what’s to stop them from rising up in England the same way they did in France? It’s easy to forget these tensions when you’re a modern looking back at history, but it must have been absolutely palpable. (For more on Austen’s personal connections to the French Revolution, I recommend picking up The Real Jane Austen.)

But is it really Jane Austen’s England? While quotes from the novels both introduce each chapter and are scattered throughout the text, there’s precious little that makes it specifically the world of Austen, especially when it’s jumping all over the social structure to explain who was treated in what way. When I picked this up, I imagined a book that explored the England that Austen herself would have encountered on a daily basis, not the entirety of the England that she lived in. It’s not incorrect to call it Jane Austen’s England—when you think Regency, you think Jane Austen—but it does make the book seem a little shy, as if it can’t stand on its own as a book about Regency England without directly referring to Austen, especially when Woodforde and Weeton’s voices dominate the book so thoroughly. Of course, they’re hardly big names, but I hope this book brings them both more exposure for both Austen fans and history buffs.

Bottom line: A very brisk primer on Regency England crammed full of interesting details—blink and you’ll miss something cool. But I’m a bit confused as to why it’s called Jane Austen’s England when the voices of two other writers dominate the book so thoroughly.

I received this book from the publisher for review.

Jane Austen’s England came out on the 15th—yesterday!