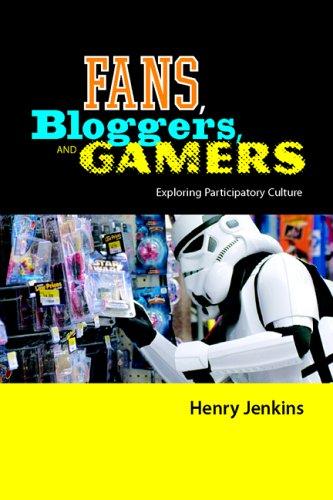 (This is one of my “lost reviews”—reviews I wrote and finished but, somehow, never posted to the blog! I read this last May. Enjoy!)

Let me just say this upfront—this book made me want to be a better fan, to the extent that I finally joined TheOneRing.Net’s forums and decided to actually make a conscious effort to get through Buffy the Vampire Slayer. (I like it just fine, but it’s just… it’s just not clicking like Doctor Who does, you know?) I stumbled across Henry Jenkins through his discussions on the implications of fanvids and was blown away by the fact that Media Studies actually studies fandom and takes it seriously in an academic context. You can imagine the sense of immense validation I felt. Alas, because his work is academic, his books are harder to find through public libraries—but PINES did kick up Fans, Bloggers, and Gamers, which I gleefully put on hold.

Fans, Bloggers, and Gamers collects Jenkins’ essays on fandom, fan culture, the digital age, and media consumption into three distinct categories—“Inside Fandom”, which looks at the pre-digital and very early digital fan experience in science fiction fandoms (specifically Star Trek), “Going Digital”, which looks at how the Internet affected fan experiences, and “Columbine and Beyond”, which examines both fandom and the Internet as a safe space for young people and a locust for the fears of their parents and the adults that govern them. As Cory Doctorow says on the back cover, Jenkins is a fan, writing from the inside about that glorious thing known as fandom.

As a wee lass, I came at fandom through anime. For a while there, I thought fandoms were almost exclusively targeted at Japanese media (I was not the brightest child), which ultimately meant that it took me well into high school to discover Western fandoms and my fandom heritage therein—discovering the importance of women in the early Star Trek fandom (which now serves as the template for any new fandom) and hearing tales of the old days, when you traded tapes across the pond to help out a fellow fan. Being a digital native, I’m utterly fascinated by pre-digital fandom, so the first third of Fans, Bloggers, and Gamers fixed me to my seat. Because Jenkins is a fan himself, it often reads like a cross between listening to a fascinating professor and running into a kindly old-school fan who’ll tell you what it was like in the olden days. (And, of course, doesn’t distrust you for your newbie status—you should have seen the Star Trek fandom after the reboot came out…) Of particular note is “Normal Female Interest in Men Bonking”, which is less of an essay and more excerpts from a slash fanzine Jenkins and his wife were a part of in the late eighties and early nineties; it’s fascinating to watch women, both straight and queer, trying to hash out the implications of their attraction towards pairing off male characters instead of focusing on female characters.

But this collection isn’t just an academic fandom history; Jenkins explores the conflict between old forms of consuming media (and what media is worth consuming) and the new, fannish way of consuming media. As Jenkins puts it in “Star Trek Rerun, Reread, Rewritten”, “Consumption becomes production; reading becomes writing; spectator culture becomes participatory culture” (60). This not only leads to conflict when the textual producers—the companies that own it—try to contain fannish activities, but conflict when people who assume that spectator culture is the only form of consumption that exists… like government officials trying to regulate the consumption of video games. Did you know at one point, a legal official in the United States ruled that video games weren’t protected under free speech, because they apparently had no redeeming values? It’s since been overturned, but the tension that led to it still remains. Jenkins in particular focuses on violence in video games, which he was called to Congress to testify on in the aftermath of Columbine, as he relates in “Professor Jenkins Goes to Washington”. Jenkins points out how anti-popular culture folk view “children” (in actuality, adolescents) are considered to be empty vessels who don’t analyze or even think about what they’re consuming—which is downright insulting to our youth and gamers. (If you want to learn more about how video games can be an art form, I highly recommend Extra Lives by Tom Bissell.) Jenkins points out that the supposed dilemma is framed all wrong; “The key issue isn’t what the media are doing to our children but rather what our children are doing with the media” (194). It’s powerful stuff.

Jenkins is, naturally, a huge proponent of fandom—in the introduction to “The Monsters Next Door”, wherein he and his son examine episodes of Buffy the Vampire Slayer to point out the value of analyzing popular culture, he points out that he and his wife specifically chose to teach their son to “play with pop culture” (226). But while he’s positive about it, fandom is not perfect… although he doesn’t analyze some of these implications as much as I would like. I suppose I’ll have to seek out one of his books, not a collection like this. In any case, “Pop Cosmopolitan” explores globalism and fandom, especially when it comes to anime fandom—where is the line between new orientalism and honestly being interested in another culture? There’s a lot of ground here to cover, and it’s all fascinating.

Bottom line: If you’re any kind of fannish, Fans, Bloggers, and Gamers will appeal to you, since some essays feel like a old fandom veteran telling you stories about what it was like back in the day when you had to tape your shows on VHS—which it is, since Jenkins is one of us. For the non-fannish, this collection asks and explores important issues, like the conflict between the old consumption of media and the new, fannish consumption of media. A worthy read.

I rented this book from the local library.