The Bonfire of the Vanities
by Tom Wolfe

And, at last, we come to the New York City reads.

It was inevitable, of course; part of the joy of living here is seeing the city refracted at you in virtually all visual media produced in America. (Captain Cinema and I now have the habit of yelping out locations we’ve been to whenever we see them, including eying the seats in which our not yet born butts will perch forty years later as we watch classic Saturday Night Live.) While I’ve been dying to read The New York City Diaries long before moving here was a sure thing, I decided to save it for my Thanksgiving visit home as a literary tether to civilization in the wilds of suburbia. (The physical tether will, of course, be the stunning amount of hair I’ve shed over this city.) Instead, I reached for Tom Wolfe—it was high time we got reacquainted.

While trying to articulate the peculiar beauty of Wolfe’s writing to Captain Cinema while breezing through one of the Strand’s cozy outposts, I ended up comparing his writing to sleep paralysis. “You know, when you’re so tired that you close your eyes, but you’re not asleep, but you couldn’t open your eyes or move for the life of you, and it’s wonderful?” (If you think I’m long-winded in prose, you should hear me talk.) Sleep paralysis is too extreme a descriptor, of course, but it’s circling what Wolfe’s writing does for me. Reading Wolfe is like submerging into a welcome fever—there’s something warm and compulsive about his writing, that insinuates itself into your mind. After I read The Electric Kool-Aid Test, I woke up with his literary voice in my head the next day. Perversely, this is because Wolfe is such a gifted mimic of not only the human voice, but the human context. I’ll need to read more Wolfe to finalize my conclusions, of course, but, with The Bonfire of the Vanities and The Electric Kool-Aid Test as my data, I find that what sets Wolfe apart is his ability to capture the moments that make up a movement, be it in his own voice or in a fictional one. I’d start pulling quotes, but we’d be here all morning.

END_OF_DOCUMENT_TOKEN_TO_BE_REPLACED

In curating your ideal bookshelf, you are constructing an expression of yourself in that specific moment: what’s important to you right now? The contributors to My Ideal Bookshelf have different ideas of import. Some focus on reference, others on beloved texts, others on texts they haven’t read yet but want to or think they need to. As an editor at heart, curation comes naturally to me: my spring cleanings are more ruthless culls. With my birthday on Tuesday, I thought this would be a good time to start a new tradition: to celebrate my nativity each year, I will curate my ideal bookshelf, so that I may count my rings in the future. The rules? Ten books I would actually use as reference material. Commence shakedown.

END_OF_DOCUMENT_TOKEN_TO_BE_REPLACED

It’s the last Sunday of the year, so you know what that means. Either I’m getting stingier or this year hasn’t been the best reading year for me—while last year’s year in review post was agonizing to curate, I did this year’s in a few hours. Hopefully, 2013 will ring in a higher batting average for my reading. But it’s not that I haven’t enjoyed my reading this year; I definitely have, especially my nonfiction reading—I mean, I discovered Tom Wolfe this year, so that is a definite plus. As ever, this list is culled from what I read in 2012, not what was released in 2012 (although I read more recent titles this year than in past years).
END_OF_DOCUMENT_TOKEN_TO_BE_REPLACED

For us Americans, this past Thursday was Thanksgiving. I finally was able to convince my mother to let me “help” (i.e., take over) with Thanksgiving dinner, and we had a fantastic time brainstorming a menu and executing it. And it was so nice to spend a few days at home, tending to things, like trying new recipes, interviewing librarians for grad school, and finally return my friend Natalya’s The Mighty Boosh DVDs. It’s a nice bit of decompression before the final push, so I’d thought I’d extend the holiday a bit and share what I’m (bookishly) thankful for.
END_OF_DOCUMENT_TOKEN_TO_BE_REPLACED 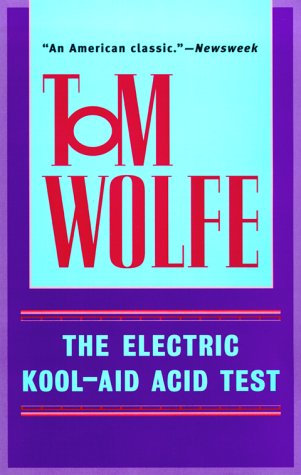 I have very little sense of pop culture history before the eighties, and that’s only because I Love the 80s was split up into ten episodes devoted to each year and I watched that in order. This is a constant source of amusement and disappointment to my roommate—I mean, I thought Pat Benatar wrote “Helter Skelter”, for Pete’s sake. But in the digital age, there’s no excuse for ignorance, so I decided to educate myself. A little research dug up The Electric Kool-Aid Acid Test, neatly combining an introduction to Tom Wolfe with an introduction to the counterculture of the 1960s.

END_OF_DOCUMENT_TOKEN_TO_BE_REPLACED

Rock and Roll is Here to Stay edited by William McKeen

Every summer, I like to have a project, and this summer, it was supposed to be acquainting myself with film. Towards the end of the summer, however, it ended up acquainting myself with rock music. Part of the reason I read so voraciously is that I lack a lot of context, and one of those contexts is popular music. Hence The Rolling Stone Illustrated History of Rock and Roll. But while I was poking around the 800s in the nonfiction section at the library, I stumbled across this anthology and thought it sounded very interesting, so I determined to read it once I had an overview. And I ended up reading a six hundred page anthology while I desperately needed to boost my posting buffer. Of course.

END_OF_DOCUMENT_TOKEN_TO_BE_REPLACED

The Right Stuff by Tom Wolfe