The Raven Boys
by Maggie Stiefvater

I’m actually very punctual in real life, so it never ceases to amaze me how late I turn up to bandwagons. The book blogging community has been raving about The Raven Boys since 2012, and the final book in the quartet, The Raven King, was released this year. It was only seeing the (I’m assuming positive?) weeping and gnashing of teeth on Twitter that I thought, well, I really loved The Scorpio Races… and made an effort to collect it from the public library. I was briefly thwarted by others doing much the same thing—or fans trying to reread the whole cycle in one go, which I heartily salute—but finally was able to get my hands on it and read it.

So, if you, like me, are a little unfamiliar with The Raven Boys, let me catch you up. END_OF_DOCUMENT_TOKEN_TO_BE_REPLACED 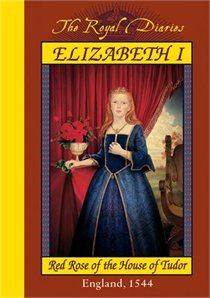 The Royal Diaries: Elizabeth I: Red Rose of the House of Tudor
by Kathryn Lasky

When I’m cherry-picking nostalgia bombs with other bookish people my age, Scholastic Press’ Dear America inevitably comes up when you’re talking book series of the late nineties and early aughts. (I literally just had this conversation last week, while visiting a college friend in Texas.) First published between 1996 and 2004, the series featured diaries written from the perspectives of young women at critical moments in American history. It was so popular that it’s not only been recently relaunched (as of 2010, with both new titles in the series and just reissues of the original), but spun off three other series. My Name is America was Dear America’s staff counterpart, while My America was aimed at younger children. But The Royal Diaries, which took the formula and reapplied it to young royal women throughout human history, was, in my young eyes, clearly superior.