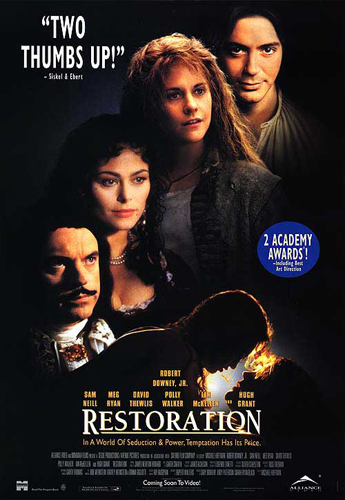 After watching X-Men, I wanted to look into Ian McKellan’s filmography a bit more. In doing so, I stumbled across Restoration, a period film from 1995 that not only features Ian McKellan, but also stars Robert Downey Jr. Since I haven’t seen much of Downey’s work pre-drug bust, I nominated it for Tuesday Night Movies with a cinephile friend of mine since it was unavailable on Netflix as a DVD but available on Instant. (Obviously, this was before Netflix separated the two services in a frankly rude move.) I didn’t even realize it was based on a novel until the credits, but I was sufficiently stunned.