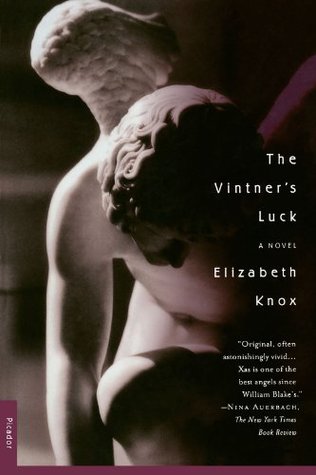 The Vintner’s Luck
by Elizabeth Knox

You know how you can spot a period film made in the nineties? Well, I’m going to be no help, because I can’t quite put my finger on it, but I know it when I see it. Like in Restoration—there’s something about the production design. The quality of the costumes. The Meg Ryan. It might be set in the 1600s, but a single frame can tell you that it was released in 1995. Never mind the fact that it can be carbon-dated by the fullness of Robert Downey Jr.’s lips. (This is why I nearly crawled out of my seat and over the very sweet Spider-Man fan when young!Tony appeared in Captain America: Civil War. His mouth was wrong.)

The same is true of, for some reason, most queer-minded media made in the late nineties and early aughts that I’ve consumed. Velvet Goldmine and The Vintner’s Luck have nothing else in common besides “dudes kiss in them” (oh, and shirtlessness, I guess?), but the quality of the atmosphere is quite similar—heady, languid, rarefied.