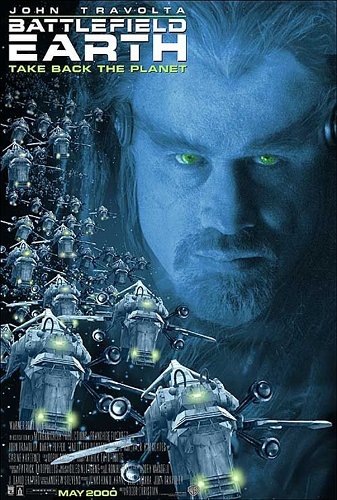 There’s a certain moment that occasionally happens when I watch movies. I’ll be watching with friends or by myself, and as the title credits try to make themselves discreet against the opening scenes of the film (this has gotten less popular nowadays, which I thoroughly appreciate), I’ll notice the credit “based on a novel by…”. Immediately, I change the way I watch, because I’m going to have to review it. As you can imagine, this gets interesting when I’m watching a film with my Film Depreciation crew, because riffing often gets in the way of plot points. (This is why people have a hard time watching movies with me; at the premiere for The Hunger Games, an acquaintance of mine warned me that if I spoke a word during the film, so help me God… I promised her I would be as silent as the grave. I did riff the trailers, however. It is only fair!) And that’s exactly what happened with Battlefield Earth. Oh, boy.