Oh, series. I was organizing my Review Directory by series yesterday, and I’d just like to take a moment to tell non-speculative fiction authors that a snappy title for a series works wonders; compare and contrast His Dark Materials and The Karen Vail Novels. If it has an internal chronology, it’s a series; own it! Love it!

But the thing is, series are hard to do, and many authors screw it up. Ideally, each installment in a series ought to be a standalone novel—yeah, it makes more sense and works better when read as part as the series, but you should be able to pick up Harry Potter and the Chamber of Secrets and be able to follow along and enjoy that novel’s story. The novel is the basic unit of a series, and it irritates me to no end to see authors think that splitting manuscripts in two is how you do it. It’s not—the only author I’ve see pull this off successfully is Jacqueline Carey in The Sundering, and she paid attention to pacing and structure to pull it off. I was hugely disappointed when The Innocent Mage and Pegasus pulled this. On her website, Robin McKinley called the sequel to Pegasus “a sequel like THE RETURN OF THE KING is a sequel to THE TWO TOWERS“, which I’ve always found flippant, considering The Lord of the Rings is a single novel. In fact, with The Hobbit and The Lord of the Rings, Tolkien does a series right—they’re richer in tandem, but aren’t required to understand each other.

I guess I do prefer standalone novels—in series or one-shots.

While I’m glad I’m making more of an effort to showcase other genres on The Literary Horizon, I won’t lie–I’m always pleased as punch when I realize I can feature fantasy again. (The rule, if you haven’t been playing along at home, is that I can’t read or feature a genre twice in a row.) Today, we’re looking at two fantasy titles from the ’00s–one that’s technically historical supernatural fiction and one that’s solidly fantasy.

END_OF_DOCUMENT_TOKEN_TO_BE_REPLACED

I have picked up the first installment in many a series, only to set it down again and never give that series another thought. Sometimes, it’s a bad book, but overwhelming, it’s because the novel fails as an installment in a series; it cannot stand on its own two feet or threatens to turn into the same book, executed over and over again. Which problem it has usually depends on what kind of series it is–close-ended (as most speculative fiction or historical fiction series are) or open-ended (as most mystery or contemporary fiction series are). With how popular series are in the genres that lend themselves to them, why is it apparently so hard to make them work?

END_OF_DOCUMENT_TOKEN_TO_BE_REPLACED

While perusing the fabulous T. J.’s new digs at Dreams and Speculation, I noticed that her tags included something else beyond the usual rating system and authors–the publishers were tagged as well. Editing and publishing is what I want to do with my life, but I never paid much attention to who published the things I love before I decided on that fact. This week, I took it upon myself to clean up my tags, so I decided adding the publishers couldn’t hurt. (Fun, irrelevant fact: WordPress doesn’t do spaces between periods for tags, which is why poor Professor Tolkien’s tag looks so squished to your right.) Anyway, I wanted to see–who publishes what I like?

END_OF_DOCUMENT_TOKEN_TO_BE_REPLACED

The Innocent Mage by Karen Miller 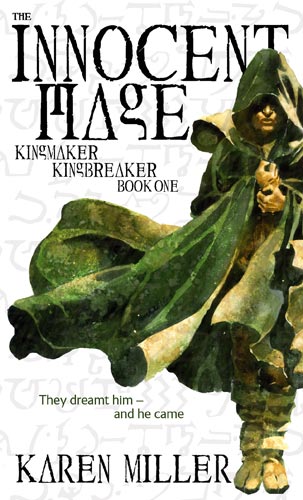 I’ve been seeing Karen Miller’s novels around since high school. The American covers for her work are all gorgeous and in harmony with each other, and the back covers always sounded interesting–Empress, the Miller novel I really want to read, concerns a slave who manages to claw her way to the top of her desert empire. That sounds awesome. So I when I saw The Innocent Mage forlornly on its side in my local thrift store, I thought I might as well get acquainted with Karen Miller and her work.

END_OF_DOCUMENT_TOKEN_TO_BE_REPLACED

Teaser Tuesdays is a weekly bookish meme, hosted by MizB of Should Be Reading. Anyone can play along! Just do the following:

As poisons went draconis was relatively painless, but even so… Jervale forgive me, I have no choice. Either I soil my hands a little now, or see them soaked in blood later.

pg. 217 of The Innocent Mage by Karen Miller.

I have always tied certain songs to fictional works, for whatever reason. This is probably linked to my love of musicals and my love of songs with an actual story over more vague ones. (More “The Mariner’s Revenge Song” than “L-O-V-E”). “Viva La Vida”, for instance, reminds me strongly of The Legend of Zelda. (But to be totally honest, it actually doesn’t take a lot to remind me of The Legend of Zelda.) But while I was reading The Hunger Games, I had one of the strongest musical reactions to a novel I think I’ve ever had. Spoilers for The Hunger Games abound, obviously–avoid this Sunday Salon if you wish to remain as pure as the driven snow.