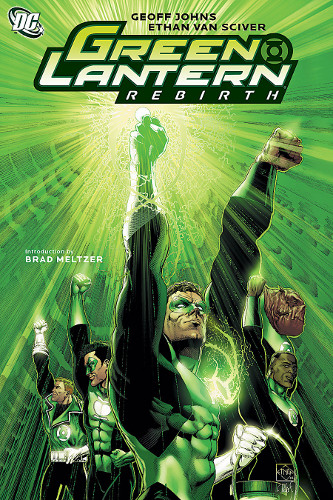 I’ll be honest: I don’t particularly get Green Lantern as a concept. I mean, space police, power rings, the fact that John Stewart is awesome, these are all things I get. But the Green Lantern approach to fear has always left me a little cool. Firstly, because it means that Hal Jordan, the Green Lantern for those unfortunate enough not to grow up on a steady diet of the DC animated universe, is a cocky, fearless pilot. As an Air Force brat, I only find this twentieth century archetype interesting when it’s played by Tom Cruise and set to the musical stylings of Berlin. So while I have seen (in slack-jawed amusement at its sheer badness) DC’s hilariously tragic attempt to bring Green Lantern to the big screen, I don’t really have any investment in the character.

But Green Lantern: Rebirth kept popping up over and over again as a good recommendation. Not so much to get into the character, but because it (like its spiritual sequel Flash: Rebirth) streamlines years of messy comic book continuity. When superhero comics are referred to as modern mythology, it’s largely because, like mythology, they consist of many stories (including often different versions of the same story) that are loosely but not firmly related featuring the same cast (including often different versions of the same cast). The accurate approach to adapting such a tentacled beastie is picking and choosing. This is how we end up with interpretations of Batman as varied as Batman: The Animated Series, Batman: The Brave and the Bold, and, as it is foretold, Batman v Superman: Grimdark Grimdark Grimdark. And, gloriously, they’re all valid—not only because all readings are valid, but because the source material encompasses all of those approaches. It’s an ever changing beast.