I have recently discovered that I have somehow gotten someone else addicted to Ōoku: The Inner Chambers. In my local library system, books don’t really recirculate back to whatever library from whence they came; they just stay at the library they were most recently returned at. This makes for a surreal browsing experience when I’m trying to milk as much air conditioning as I can out of the library before popping over to the drug store. I’m surrounded by books I’ve already read.

My fellow fan, however, is farther along in the series than I am—which is fine with me, because that means I never have to wait for the next volume.

Previously on Ōoku: The Inner Chambers, we were exploring the origins of the matriarchal (but not quite…) society of Japan, something kept secret from the rest of the world. The Redface Pox continues to cut down Japan’s male population. The secretly female shogun Iemitsu (only her favorite lover calls her Chie) has been happy with her lover and seeming soulmate, the former monk Arikoto. Lady Kasuga, the power behind the throne, approves, so long as Iemitsu provides a male heir.

The only problem is that Arikoto appears to be infertile, forcing Kasuga and Iemitsu to look elsewhere. But even as Kasuga clings to the idea that a male heir is the key to Japan returning to normal, the working women of Japan must face the inevitable fact that the Redface Pox is not going to stop.

END_OF_DOCUMENT_TOKEN_TO_BE_REPLACED 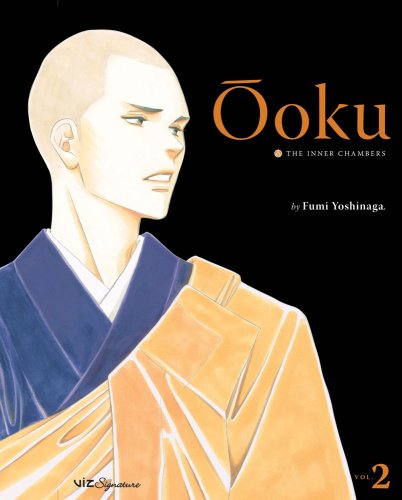 It’s taken me a while to sit down and review this. I tend to have a lot of trouble reviewing middle installments of serialized comics, even if the collection contains a complete arc. If I’ve already covered the premise, it’s hard for me to rehash what I’ve already said unless the new arc does something wildly different. (This is part of the reason why I so rarely review television shows. Good thing Sailor Moon crams a thousand things into every season.) Also, while my current pace of reading lagged behind my previous schedule, it actually still kind of supersedes my current schedule. I actually, for a very welcome first time in a while, have a backlog. Which is magical, but May has been running me ragged. I just need a day to blast through them all.

I’ll get there—I always do—but I did want to mention this by way of apology to Ōoku: The Inner Chambers. The series as a whole does not deserve me dragging my feet, and this volume, in particular, demands only a standing ovation. While Ōoku: The Inner Chambers is serialized, in that each chapter is published in the magazine Melody, it’s also structured in larger, more complete arcs for its yearly publication as a volume of manga. It feels much more like installments in a book series, versus a collection of serialized comics (which is no burn on serialized comics as a medium, I should stress), which speaks to Fumi Yoshinaga’s mastery of the form.

END_OF_DOCUMENT_TOKEN_TO_BE_REPLACED

There’s a troubling tendency for texts purporting to explore a world where women are the dominant gender to simply recast the patriarchy as a matriarchy and call it a day, instead of trying to honestly engaging with gender and reimagining it. I am thinking very specifically of Dungeons and Dragons’ drow and other matriarchies that still cater to the male gaze. Because of this tendency, I tend to shrug off stories that largely swap the roles of the gender binary and focus on stories with a more nuanced view towards gender.

However, I always keep my ear to the ground, because I love being proven wrong. Fumi Yoshinaga’s Ōoku: The Inner Chambers comes with impeccable pedigrees, from the now-defunct, now-deleted, and always missed Dreams and Speculation, where I heard of it first, to its James Tiptree Jr. Award (the first for a manga), to its Eisner Award nomination. The matriarchy of Ōoku: The Inner Chambers is not a simple patriarchy/matriarchy swap. After a plague kills seventy-five percent of the male population of Edo Japan, the manga picks up eighty years later, after the culture has changed to reflect the rarity and fragility of men. Women now fill traditionally male roles—to the point that Yoshinaga’s cast is largely composed of female versions of real historical Edo figures—while men are now kept secluded from the world, valued only for their role in reproduction. Men are so rare that only the most wealthy of women can afford to pay a man’s dowry. An entire harem of men, reserved solely for one woman’s pleasure, is the ultimate luxury, and reserved only for the Shogun.

END_OF_DOCUMENT_TOKEN_TO_BE_REPLACED

I’ve stopped identifying graphic novels as such on my reading list; the only place where I can do so would be under “Genre”, and a graphic novel isn’t a genre—it’s a medium. But I still ended up with two historical graphic novels on my list. Okay, technically, one of them is alternate history, but it’s historical nonetheless! I’ll have to wait until I’ve read Scott McCloud’s Understanding Comics to tuck these under my belt, but I’m very much looking forward to it.