The Gods of Mars by Edgar Rice Burroughs 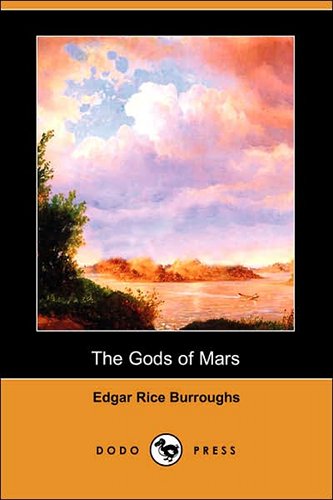 I read A Princess of Mars in preparation for John Carter—I enjoyed both, although I enjoyed the novel a bit more than the film. But there’s little hope of a sequel at the moment. (I’d feel sorry for Disney’s eternal struggles for a fresh action franchise if The Avengers hadn’t just made all the money ever.) In any case, I didn’t have any particular reason to pick up the series again, except that I was in the mood for something short, swashbuckling, and uniquely Barsoomian. That I could read on my computer while doing my hair. Sometimes it’s just not that complicated, folks.

END_OF_DOCUMENT_TOKEN_TO_BE_REPLACED

My father and I have this tradition—we go see big, loud, action-adventure films together. My mother can’t stand the noise (she brings earplugs to films! Adorable) and she doesn’t like science fiction, so off we trot to Avatar and the like. And this is why we ended up seeing John Carter; I’d planned on seeing it anyway, and while my dad wasn’t too enthused by the prospect, there wasn’t much else among the early spring films in the theaters. Luckily, my dad ended up really enjoying it, to the point of wanting to show it to my mom. (And thus the cycle continues…)

END_OF_DOCUMENT_TOKEN_TO_BE_REPLACED

Tarzan
based on Tarzan of the Apes by Edgar Rice Burroughs

I saw Tarzan once, perhaps in theaters—considering it came out when I was eight, I don’t particularly remember. I did see it, though, but ended up forgetting about it except as my personal definitive end-date for the Disney Renaissance that started with The Little Mermaid in 1989. But considering my love for Glen Keane’s work as an animator and the fact that I’ve recently grown interested in reading the works of Edgar Rice Burroughs, I thought it was time to revisit Disney’s take on Burroughs’ most famous character.

END_OF_DOCUMENT_TOKEN_TO_BE_REPLACED

A few weeks ago, the first trailer for John Carter, Disney’s adaptation of A Princess of Mars, went up—I believe I was distracted by the third production video for The Hobbit, which gave us a look at the thirteen hobbits up close. (I may have flipped some things.) But John Carter intrigues me. I mean, it’s a screenplay written by Michael Chabon, one of my favorite writers, and directed by Andrew Stanton, who is a fantastic director. (Side note: in the great big DCU reboot that’s going down at the end of August and beginning of September, there’s a title called I, Vampire whose main character is named Andrew Stanton. Google is your friend, that’s all I’m saying.) So, let’s take a look at the trailer!

END_OF_DOCUMENT_TOKEN_TO_BE_REPLACED

A Princess of Mars by Edgar Rice Burroughs

I think I first discovered Edgar Rice Burroughs’ Barsoom novels when the first few discussions about the upcoming Disney adaptation (HA!) were circulating around io9. Before that, I only knew Edgar Rice Burroughs’ Tarzan, but A Princess of Mars interested me for much the same reason the more traditionally fantasy elements in Star Wars interested me—it’s sci-fi that hits a little closer to home for fantasy-addicted me. Plus, it was in the public domain, so there was really no reason not to pick it up and give it a shot before the film comes out. And guys, I think I have a new series to follow.

END_OF_DOCUMENT_TOKEN_TO_BE_REPLACED

I will valiantly defend to the death the amazing, life-changing work that comes out of speculative fiction—by the way, have I mentioned you should read The Sundering by Jacqueline Carey recently? But there’s still always a time for good, old-fashioned pulp fiction, which is exactly what we’ll be looking at today.