Reading editor Jessica Amanda Salmonson’s introduction to Amazons!, the first major fantasy anthology featuring female protagonists, is a strange experience for the modern feminist-minded geek. On the one hand, I find few things as heartening (or heartwinning, as Salmonson puts it in the introduction to T. J. Morgan’s “Woman of the White Waste”) as discovering new-to-me texts that prove speculative fiction has not always been the (white, straight, cis) boys’ club people inside the genre and out often assume it is. On the other hand, it’s less heartening to realize that we’ve been having largely the same conversations about diversity and representation for decades. I’m no less motivated to fight the good fight, of course, but it makes for some bittersweet reading.

Emphasis on the sweet, though. I mean, it’s an entire anthology of lady-centric fantasy from the dying days of disco, topped off by a list of nonfiction and fiction books deemed relevant for people interested in that subject matter. And if you’re not interested—well, I think you’re on quite the wrong blog, friend.

END_OF_DOCUMENT_TOKEN_TO_BE_REPLACED

What’s the best book you read this year?

For the best (and my favorite!), I refer you to my 2010 in Review post—the top spot on my top ten list went to, of course, The Lord of the Rings, which I reread in the spring. As I walked the dog yesterday, I pondered the pre-The Lord of the Rings world; it was kind of frightening.

As for the worst? C. J. Cherryh’s The Paladin, a novel that tries to get you to sympathize with a protagonist who believes in corrective rape. Disgusting. Corrective rape is still a problem in our world; if you’ve a moment, please take it to sign this petition to make corrective rape a hate-crime in South Africa (it’s commonly used to assault lesbian women). It’ll make me feel better about having read this.

An honorable mention must go to Abby from Tyger Tyger, an annoyingly unfunny sassy best friend who absolutely infuriated me, although the book itself was decent. I hope she gets eaten by goblins, that binary-reinforcing, disrespectful, pace-destroying twit.

A tie between Good Omens and The Count of Monte Cristo. (And by childhood, you meant awkward preteen years, right?)

2. What are you reading right now?

The Way of Kings by Brandon Sanderson.

3. What books do you have on request at the library?

None at the moment, as I’m about to move back to college and need to deal with a different library.

5. What do you currently have checked out at the library?

Stephen King’s Misery and a VHS of Disney’s The Three Musketeers.

END_OF_DOCUMENT_TOKEN_TO_BE_REPLACED

The Paladin by C. J. Cherryh 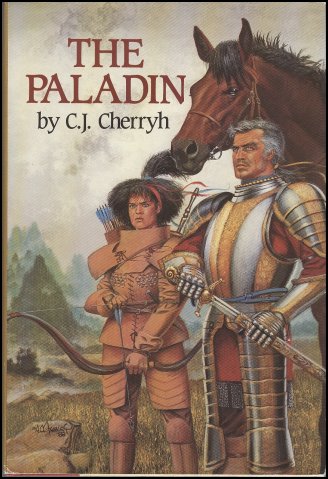 A one star review? I’m just as surprised as y’all are, quite frankly. I never thought my first one star review would go to a C. J. Cherryh, a recommendation from the magnificent Jo Walton, author of Tooth and Claw, and a book beloved by lots of people. I was quite looking forward to The Paladin, and I was delighted to find that my local library had it. I enjoyed parts of it, and I’m certainly not giving up on Cherryh just yet. But my requirement for a one star review is a book that’s offended me on some level, and lo, The Paladin offends me.

END_OF_DOCUMENT_TOKEN_TO_BE_REPLACED

Recently, my mother found a Books-a-Million gift card lying around the house, and handed it off to me. There were ten dollars left on it, or, in reader terms, one mass-market paperback. I started picking through the sci-fi/fantasy section. I must have looked lost, as a very nice employee came to my aid with plenty of recommendations. (I ended up buying The Name of the Wind, by Patrick Rothfuss.) During our conversation, I asked him where to start with Mercedes Lackey. He suggested The Shadow of the Lion over Magic’s Pawn, where he started. I asked him why, and he said to me, lowering his voice to a conspiratorial level, that the main character was gay.

I really didn’t have to the heart to tell him that not only was he talking to a queer girl, but an ace one at that. (It’s just so awkward when this happens.) As I regaled my mother with the story, she suggested that perhaps it was difficult for him, a straight male, to identify with a gay male. I think that’s no excuse, but it did get me to thinking about how I identify and empathize with characters.

END_OF_DOCUMENT_TOKEN_TO_BE_REPLACED

Teaser Tuesdays is a weekly bookish meme, hosted by MizB of Should Be Reading. Anyone can play along! Just do the following:

That attraction to the scar embarrassed Shoka, who found himself both rude and careless; and by that, discovered himself snared in an attention to the whole face that he did not generally pay to his few visitors.

“I want justice,” the boy said; and snared him twice over.

Today, we take a look at two fantasy novels featuring young female heroines that I’ve recently added to my ever-expanding list. And, as a bonus, at least one of them lacks romance!