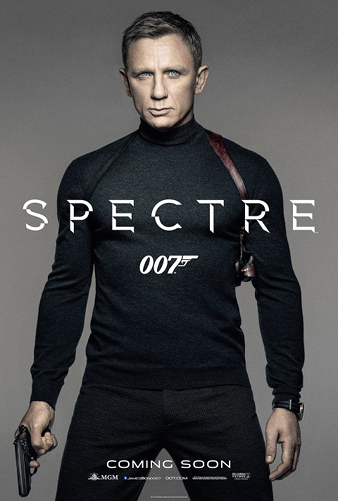 Spectre
based on characters by Ian Fleming

Spectre feels like it comes from an alternate timeline: specifically, an alternate timeline where the double punch of Die Another Day and The Bourne Identity had not resulted in a hard reboot of the franchise. In this timeline, Brosnan bangs out another movie; Craig slips neatly and seamlessly into the role after fans mutter about how he doesn’t look like Bond (nerds: we’re the same in every timeline); and the quips and the gadgets are thick on the ground. It’s a simpler and more basic Bond franchise in that timeline. How back to basics are we with Spectre? Let me put this way: there are sexy naked ladies in the opening credits sequence again.

At the end of Skyfall, we saw Bond complete his evolution into a masterless monster; answerable to no one now that the one person who could control him was dead. What those final frames suggested was not that we could now return to business as usual, but that the inevitable attempts to do so by the institutions and infrastructures attempting to utilize Bond could only end in tears and explosions. (Just look at the way he sizes up Ralph Fiennes. He feels equal to that man, and that is dangerous.)

END_OF_DOCUMENT_TOKEN_TO_BE_REPLACED

Crimson Peak’s box office may not be what Universal wanted, but I have been having a ball seeing it hit home with its intended audience: gothically and/or Romantically inclined women of all ages. I’ve seen (and, of course, promptly misplaced) tumblr commentary indicating that this was exactly what they yearned for as preteens when their mainstream and more current peers were focused elsewhere. All of this delighted sighing over romance and stylized frights brought me back to my own adolescence.

In 2004, back when I was a young preteen full of unspeakable urges (queer ones, not Byronic hero urges—well, not those Byronic hero urges), it was The Phantom of the Opera that captured the bloody hearts of the preteen Romantic hordes.

I mean, let’s face it: The Phantom of the Opera boasts a lot of similar elements as Crimson Peak. Beautiful, crumbling architecture, death looming in the shadows, young love, beautiful young women rising above their stations, gorgeous costumes, and brooding. Of course, there’s a Phantom in the sewers of Paris rather than [SPOILER REDACTED] in the attic, but both looming threats are surprisingly seductive. Oh, and there’s songs.

END_OF_DOCUMENT_TOKEN_TO_BE_REPLACED

On this, All Hallow’s Eve Eve, let me spin you a spooky tale, dear readers. Of a desaturated period movie from 2012. Concerning a famous American historical figure. Set in the Mid-Atlantic in the 19th century. Whose frames are splattered with CGI blood. Lots and lots of CGI blood. (I guess when it’s digital, it’s free!) And, of course, featuring historically accurate sunglasses.

What’s that, reader mine? No, I’m not talking about Abraham Lincoln: Vampire Hunter! No, that would be exciting, because there would at least be supernatural nasties at work (and Dominic West working some sick sunglasses). Although, having not seen it, I can’t authoritatively say if it’s exciting or not. In any case, my kittens, we are instead talking of The Raven, 2012’s other strange high-concept historical movie that came from beyond Grimdark Canyon for what surely must be some good reason. If only the film could think of it.

END_OF_DOCUMENT_TOKEN_TO_BE_REPLACED

The Final Solution by Michael Chabon

As ideologically mixed as I am on How To Be Gay, it’s nonetheless provided me with some fresh analytical lens. I knew what a subculture was, of course, but had never thought of it in context of its relationship to the culture at large. (It’s hard to take a step that far back to get a better vantage point.) A subculture requires a culture to be sub to. It can only be understood in the context of that grander culture, which it reacts, negatively or positively, to. Of course, this is getting complicated as the (American) monoculture continues to splinter, but the point remains.

END_OF_DOCUMENT_TOKEN_TO_BE_REPLACED

There was no reason for Sleepy Hollow to be good. When its first trailer debuted, I cackled alongside my friends and felt the familiar rush of stumbling across something so bizarre and high-concept that it could only gratify my ravenous hunger for good-bad media. (It’s the same way I feel about X-Men: Days of Future Past, no matter how many times I might say that I think it might be good. I mean, sure, there’s a chance! But there’s just so much going on. It’s like a Claudia Kishi ensemble.) I was fully prepared to thrill all and sundry with my retelling of the pilot, much the same way I recap Breaking Dawn or how Rasputin died to gauge new acquaintances.

END_OF_DOCUMENT_TOKEN_TO_BE_REPLACED

Sherlock: Series 3
based on the Sherlock Holmes canon by Sir Arthur Conan Doyle

What a difference four years make.

END_OF_DOCUMENT_TOKEN_TO_BE_REPLACED

Casino Royale
based on the novel by Ian Fleming

Casino Royale was the first Bond movie I ever saw and, until I started the Bondathon after watching Skyfall, the only James Bond film I’d seen. My father took me as part of our long-standing agreement to see action films with each other since my mom can’t take the surround sound. I remember being utterly delighted by the opening sequence and offended by the end. This was the year I concluded that the use of the word “bitch” was an instant and unredeemable misogyny bomb; I read Slaughterhouse-Five the same year. In my defense, I was fifteen. Still, I remembered it fondly as my Bond film, my entry-point into the franchise, so I was quite looking forward to revisiting it for the Bondathon.

END_OF_DOCUMENT_TOKEN_TO_BE_REPLACED

Angels and Demons by Dan Brown
read by Richard Poe 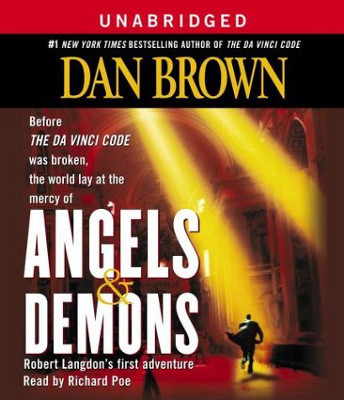 I read in fits and snatches of time; ten minutes at breakfast here, twenty minutes at the doctor here, a glorious half-hour before bed. So whenever I have huge swaths of time to plunge into a book, it sticks with me. The Da Vinci Code was one such experience, back in the Wombat Years. I must have been twelve or thirteen, slowly wobbling towards bibliophilia. My mother had either borrowed from or been given the book by a friend. It had been left out with the rest of the books that swamped the house, so I nicked it and sequestered myself in my absent brother’s room during a rainstorm. I remember that reading very fondly. It was one of the first times I grabbed a great fistful of time for myself with a purpose.

Pity I didn’t spend it on a better book.

END_OF_DOCUMENT_TOKEN_TO_BE_REPLACED

The miracle of scheduled posts (to which I owe any illusions of timeliness) means that you, dear reader, get to follow along with my adventures with James Bond every other week or so, even as I suffer through a cinematic dry spell. Before my spring break (God bless scheduled posts), I didn’t have time to watch movies outside of my weekly Film Depreciation gatherings—and I missed it. Plus, I’d convinced myself that it was hard to find the Roger Moore Bond films, even though I had Videodrome down the street and only four out of the remaining sixteen films (including this one) require me to cough up three bucks to rent it on iTunes. Sometimes, I am just dumb. In any case, I kicked off my spring break with The Man with the Golden Gun. Moore’s Bond already tackled blaxspolitation films—what about martial arts movies?