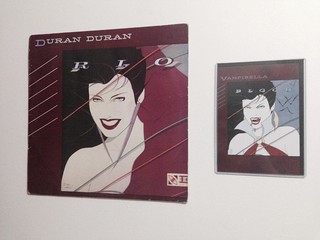 Interior design, Church of Bowie style. I spent a merry evening the other week cutting out backing for my Cliff Chiang prints that I’ve been holding onto for two years, as they’re slightly smaller than the top loaders I bought. They are now all displayed together underneath my Stacy Lee Sailor Moon print. All of my art is now on my walls—adulting prize, please.

It’s New York Pride today, so I’m off to eat food out of trucks, buy rainbow things, and make all the booth volunteers tell me their spiels. My nails were actually painted like the bisexual flag this week, but I never took a good enough picture of them.

So, the Brexit and its horrifying implications:

This piece on abuse in a non-Equity theater in Chicago was a really eye-opening, intense read.

Warcraft is the most financially successful video game movie ever made—which goes to show you the power of small sample pools.

Vulture interviews Constance Wu, who is a role model for us all:

The catch-22 is you get employment by focusing on the work, not the employment. That’s generating meaning: doing what you want to do so they can’t take anything away from you.

Anton Yelchin died in a freak accident this week. His many friends and collaborators remembered him in various, touching ways.

The table of contents for Speculative Fiction 2015 have been released!

Warner Bros. invited reporters to the set of Justice League to show that they’ve learned from Batman V. Superman. Really! It’ll be funny and well-balanced and not feature Batman throat-punching criminals! I don’t trust them, but let’s be real: the only reason I’m linking to this is because it features my boy Ezra Miller.

I’m trying to keep myself free of spoilers for Rogue One, but the fact that Darth Vader is turning up and will be voiced by James Earl Jones is very exciting. I do appreciate that it’s been confirmed; that makes it feel more like a deliberate choice rather than fan service. Although, if Palpatine makes a cameo, I will flip out.

New York City just passed a bill package that will provide free menstrual hygiene products in schools, shelters, and correctional facilities for those who menstruate. I am very proud of my city for recognizing that menstruation is more of a fact of life than an optional luxury.

Olivia Nuzzi attempts to profile Hope Hicks, Donald Trump’s press secretary, for GQ, only to be stymied by the fact that Hicks won’t agree to speak to her. Instead, Hicks agrees to be in the room while Nuzzi interviews Trump about her. The article that follows is fascinating and, like anything related to Trump, deeply depressing.

Bryan Fuller’s Star Trek is, technically, allowed to be unrated, as it will air on CBS All Access rather than an actual television network.