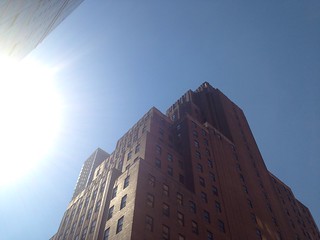 Here’s what you can do in the wake of the Orlando shooting to help. I’m not going to dwell here too much, because this has obviously colored my entire week and terrified me to my core.

This Racked piece on the DisBrides—Disney Brides—community and the realities of getting married at Disney World is fascinating.

The app formerly known as H _ _ r is a really fascinating iPhone app that uses your microphone to pick up and distort the sounds happening around you. Essentially, it autotunes your environment through a couple of different filters. I’m sensitive to noise and work in an open office, so this is an interesting way to lean into the noise level. The only problem: it makes my iPhone 5c burn up like bacon. I will use it sparingly until I move onto the next generation. But I highly recommend it!

Domhnall Gleeson is going to play A.A. Milne in Goodbye Christopher Robin, a film about the author’s life and, presumably, his son’s bitterness over being Christopher Robin. Margot Robbie will be playing Daphne, his wife, and I have never been so excited to see two people chastely British kiss in my life.

So Taylor Swift broke up with her boyfriend and has recently started dating Tom Hiddleston. At the Guardian, Alana Massey talks about this development as well as double standards, and ultimately concludes that we are not entitled to celebrities’ private lives the way we think are in the age of social media.

I usually try not to mention Trump, but lifelong Republicans going off on how awful Trump is gives me life, so.

Wicked’s film adaptation got a release date: December 20th, 2019. Man, that doesn’t sound like a real year, and it’s only three years away.

Via Jenny—Alana Massey on how the idea of a clique often demeans and dismantles female friendships.

That article also links this New Yorker piece from the late nineties/early aughts about a group of publicist socialites that is bonkers.

YouTube user TRONICBOX takes modern pop hits and remixes them to sound like eighties songs. I need a button to do this to everything ever.

Greg Howard on “Why ‘Transcending Race’ Is a Lie,” in the context of the new documentary on O.J. Simpson’s life.

This GQ cover story on Kim Kardashian is NSFW due to its photography, but it’s a fascinating look into her life and her control over her brand—which is her life.