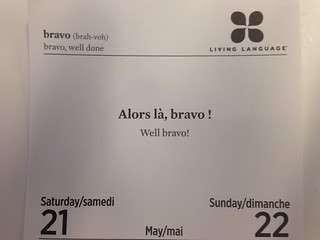 I’m not saying that sarcasm is key to a solid grasp of the French language, but it definitely helps.

Here are your 2015 Nebula Award winners.

This X-Men: Apocalypse teaser is an era-specific ad for Xavier’s School for Gifted Youngsters. I want the entire movie to be like this.

Anne Helen Petersen profiles Rona Barrett, a forgotten trailblazer for women in entertainment journalism. (You know she knows people because she also knows that Jennifer Lopez is an unstoppable force of charisma.)

The Handmaiden, Park Chan-Wook’s adaptation of Fingersmith, is getting good reviews at Cannes!

DC Studios might make a Harley Quinn movie… that will feature lots of other DC heroines and villainesses? This feels like a trick, but I’m definitely going to take the bait.

W. Kamau Bell and LeVar Burton in conversation at Mother Jones about why the Roots remake is important:

WKB: It seems we’re going to be remaking Roots every 30 years for a while!

LB: Well, how often have we seen Holocaust stories? I bring that up because there’s a wonderful tradition in Jewish culture that is about “never forget.” In insisting that this story is passed onto each successive generation, it has become part and parcel of Jewish identity. Human beings have remarkably short memories, and so it is essential that we continually remind ourselves.

Sylvia Obell explains “How Blac Chyna Beat The Kardashians At Their Own Game.”

Tom Breihan at Stereogum explains that weird swing revival in the nineties.

Labeley lets you make good-looking custom labels for anything, if you are not a design person.

At Vulture, Josef Adalian and Maria Elena Fernandez break down the economics of peak TV, from how hard it is to get crew in Vancouver (“Hollywood North”) to those A-list actors translating into lower wages for the rest of the cast.

Robin Wasserman asks, “What Does it Mean When We Call Women Girls?”

This is literally just a video of the new Star Trek’s series’ logo and I am still SO EXCITED. Bryan Fuller! In space!

Margot Robbie does a parody of American Psycho’s opening scene for Vogue. It is great.

At Vox, Emily Crockett looks at Trump from the perspective of an abuse survivor.

At Stereogum, Dave Holmes explains the rivalry between pop and nü-metal on Total Request Live in the nineties.

Oklahoma has passed a bill that will effectively make abortion illegal… which is unconstitutional.

Great Big Story tells the story behind instant noodles—which is much more interesting than I thought it would be!

This GQ profile of Bill Clinton mentions that he likes The Fast and the Furious films, which is the most Bill Clinton thing I’ve ever heard. It also touches on what a First Gentleman might able to do for gender in America, which I found interesting.

Did Blake Lively do a thing involving butts this week? The Very Smart Brothas break it down. I am linking to this mostly because they forgive Jesus for not having much of a booty and that was the hardest I laughed this week.

Helena Fitzgerald on “The Fierce Triumph of Loneliness,” which speaks to me very deeply:

The idea that we progress in a clear trajectory from single unit to couple form, and achieve a sort of emotional success by doing so, seems wrong to me. Love is about what we give up when choosing to knit our life against someone else’s—to make a home in the shared bed, and enjoy the small talk between bodies within the inhabited space. A paired life is not an aspirational state, but a compromised one. Loneliness is not the terror we escape; it is instead the reward we give up when we believe something else to be worth the sacrifice.

Malinda Lo answered a tumblr user about whether or not Ash is a lesbian or bisexual book, and I really appreciate what she wrote about author’s intent, trying to sell a book, and clarifying queerness even when the book’s universe technically doesn’t have any (as there’s no stigma related to same-sex relationships at all).

Elliott Kalan will be the head writer of the new Mystery Science Theater 3000 reboot. I have literally brought people to tears of laughter by playing them Kalan’s legendary “Tales of Ruck” bit from the Flop House’s Labor Day episode, so I am pleased as punch to see Kalan assume his rightful throne.

Films
Purchased: None
Added: Logan Lucky (via the AV Club), Neighbors, Neighbors 2, The Handmaiden (via Vulture)