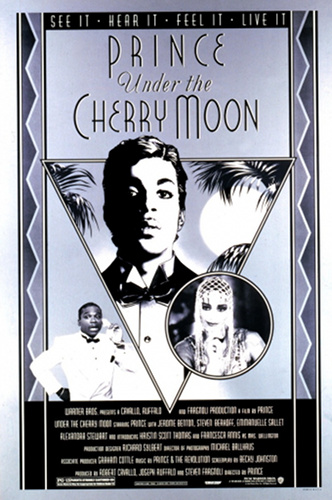 Under the Cherry Moon

Losing Prince last month affected me the same way losing Bowie in January did—abstractly. I was saddened, of course, but not hurt enough to want to take 2016 back to the celestial customer service counter. I just didn’t have a personal stake in either artist. For whatever reason, while Bowie and Prince’s music is prime territory for queer weirdos of all stripes, I never landed there to take sustenance. It’s certainly nothing they did. I just have a hard time connecting with music on that deep of a level.

Still, their passings into the Undying Lands were worthy of tribute from me. For Bowie, I lit my homemade David Bowie prayer candle for the first time (which I’d made last August, not, like, for the occasion) and saved a Best of Bowie Spotify playlist to my phone.

And for Prince? I watched Under the Cherry Moon with my comedy troupe from college.

Now, to be fair, Purple Rain was in contention as well, but, as a fan of the eighties, I wanted to watch Purple Rain for the first time in a different and slightly more worshipful context. A midnight movie crowd would be ideal, but I have lately discovered that my biorhythms are those of a medieval French farmer. My apparent biological directive to wake up at the crack of dawn (and, presumably, hike a mile up to the cheese cave to gently turn all those wheels of dairy forty-five degrees to the left) means that midnight movies are largely no longer an option. Je suis desolée.

So Under the Cherry Moon, Prince’s infamous flop, it was. If you are unfamiliar with the plot of Under the Cherry Moon (and, honestly, who would blame you?), let me sum up. Against a backdrop of the toniest denizens of the Riviera, Prince attempts to seduce $50 million dollars out of Kristin Scott Thomas in her first major film role. (It’s one she’d really rather you forget.)

Under the Cherry Moon is considered one of the worst movies of 1986. It actually tied with Howard the Duck, a film in which a woman and a duck actually do the do, at the Razzie Awards. I was prepared for the worst in celebrity excess.

But Under the Cherry Moon is not terrible. I mean, it’s certainly not particularly a coherent movie, but I’ve seen movies that make less sense. (Batman V. Superman: Grimdark Grimdark Grimdark. Bowie above us, what a haunting way to turn twenty-five.) Instead, it feels like a mix tape of cinematic influences that don’t always hang together but are nonetheless anchored by Prince and his legendary charisma. They don’t always work—filming in color but printing it in black-and-white feels like a particular slap in the face, given the striking looks in this film—but they all seem to come from an honest, if arch, place. Prince’s Christopher Tracy mocking Kristin Scott Thomas’ Mary’s accent by having her phonetically read out African-American Vernacular English? Christopher letting Mary’s father know he knows about his mistress by delivering champagne to his driveway? Christopher and Mary attempting to banter during a dance sequence as it becomes startlingly clear that neither of them can dance very well?

It’s self-indulgent to the nth degree—Prince directed it!—but in a way that intrigues instead of repulses. It probably helps that, like Purple Rain, it comes with an amazing soundtrack in Prince’s album Parade. Parade, unlike Under the Cherry Moon, was deemed one of the best records of the year, and you’re probably more familiar with it than you think you are. So let me tell you, it was a weird moment when “Kiss,” one of the best songs about loving somebody for who they are ever written, began playing. It didn’t help that it felt randomly slotted into the film, as Christopher and Mary go from fighting to, well, kissing in the span of about five seconds.

I don’t necessarily recommend it as a film—it’s hardly essential viewing for anyone—but it’s fun to watch with a group, especially as the plot takes a very hard left turn in act three.

I rented this film on Amazon.