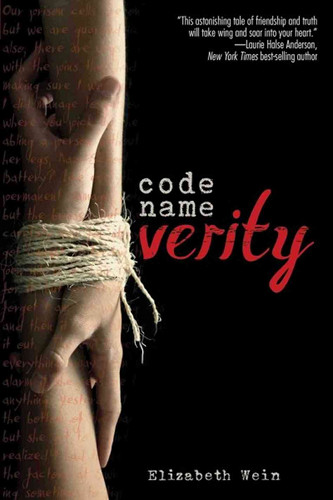 So… remember when Code Name Verity was making the rounds four years ago? Yeah, I finally got around to it last week. My lead time and my list of books to read grows longer every day, cats and kittens, but, you know, I’m a busy lady. I do busy lady things and sometimes I do them for four years before picking up a book. No big deal.

Except it kind of feels like a big deal, which is why I’m mentioning it.Code Name Verity is exactly the kind of young adult book that haunted me when I worked at the bookstore, because it came so highly recommended. World War II! Lady spies! An emphasis on female friendship being as life-altering and important as any romance! What wasn’t there to like? So I tenderly shelved it and its sister volume, Rose Under Fire, and then moved across the country and promptly forgot about it entirely until a spin through my reading list brought it back to my attention.

It did, obviously, as I’ve managed to stuff in a reference to Velvet Goldmine in a review of a young adult novel set during World War II. Code Name Verity, despite having a shorter time to percolate in the old noggin… not so much.

Code Name Verity is the account of a British spy being held by the Gestapo in Nazi-occupied France. “Verity,” as she pseudonymises herself, has two weeks to write out an account of the English government has tasked her with doing. Instead—or in place of—she writes a narrative about her best friend, pilot Maddie, dispensing information as she goes along. As light and cheerful as she tries to make Maddie’s story, she’s still despondent over her death and constantly threatened with torture, both her own and that of others.

It’s that epistolary business that trips me up. My philosophy towards editing and narrative construction involves trying to remove as many obstacles between the author’s words and their audience as humanly possible. Accessible is probably the best term for it. Of course, I recognize that smoke, mirrors, and other forms of opacity can very useful in narrative construction—the turn I shrieked at in I Love You Philip Morris wouldn’t work if we knew what was going on. (Man, I am two for two on Ewan McGregor movie references today!) Code Name Verity constructs several layers of reality. There’s what Verity is writing, contrasted against what Verity is experiencing, and, in the second half of the book, what other things are going on around Verity. (Is that vague enough to not be a spoiler? I think that’s vague enough to not be a spoiler.)

Unfortunately, that put me at a distance from the characters that I never quite surmounted, with the second half only making it worse. I was very fixated, naturally, on Verity and Maddie’s friendship, but we rarely see them together. I heartily enjoyed the moments where we did, from Maddie’s heartbreaking realization that her best friend is a spy who puts herself in danger and holds her tight to their last interaction that made me cry, but it was difficult for me to connect with Verity and, through her, Maddie. Verity and Maddie are well-drawn characters, however, so I do want to stress that I think this was a reader disconnect on the basis of overhyping myself (uh, oops) rather than a specific fault of the narrative.

However—and I feel like I say this a great deal, but it bears repeating—there’s always some value to everything I read. I was briefly obsessed with World War II novels and accounts in middle school, and I would have been delighted to read Code Name Verity at that age. It centers young, female experience in a holistic, engaging way. Towards the end of the novel, Verity’s spymaster clucks over the death of a man. Someone corrects him, telling him he ought to be clucking over the fate of the man’s daughter. It’s a very brief exchange, but it’s an important one. And one, I think, that would be dead useful to girls.