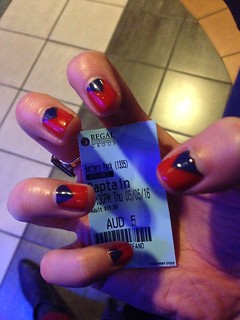 So, uh, you know Lady Business? Which I am a contributing editor of? Well, we’ve been nominated for a Hugo Award, so go us!

This New Yorker profile of Melania Trump is fascinating.

Genevieve Valentine runs down the red carpet of this year’s Met Gala.

At Highsnobiety, Elaine YJ Lee explores why so many Asian clothing brands use white models.

Rose Eveleth explains how women have been bodyhacking for years—it’s only when men do it that it becomes a tech trend.

Is J. K. Rowling turning into George Lucas? (YES. Although the author of this piece seems to labor under the impression that meta and fanfic are products of recent fandom, not kind of the point of Western media fandom…)

There’s going to be an Interview with the Vampire reboot? I… guess…?

Dear White People is going to be a Netflix television series! Huzzah!

Alden Ehrenreich is the young Han Solo, which was the best choice out of that shortlist. Godspeed, Mr. Ehrenreich!

David Ehrlich uses Ehrenreich’s casting as an opportunity to explore how casting films has changed in the age of the mega-franchise.

Tom Hooper is going to bring Cats to the big screen. I’ve largely lost interest in musicals, for personal reasons, but somewhere, my nine year old self is screaming herself stupid.