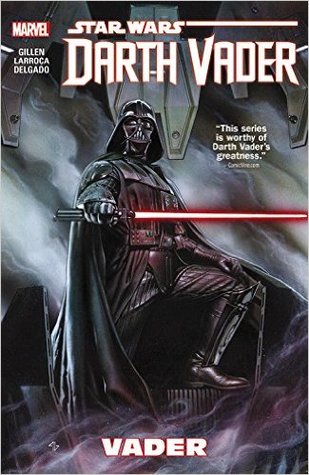 It’s embarrassing, but I’ll admit it—I wanted to read Star Wars: Darth Vader because I thought Kieron Gillen wrote “Thank the Maker.” If you’re unfamiliar with “Thank the Maker,” it is actually a 2000 Star Wars comic written by Ryder Windham about Darth Vader encountering C-3PO during The Empire Strikes Back. Vader flashes back to rebuilding C-3PO as a child, defending droid rights to his mother as she tells him that creating a droid is a big responsibility. I was so touched by Vader feeling actual pain over how far they’ve traveled from that point in time that I immediately determined to read… Star Wars: Darth Vader.

In my defense, I knew Gillen was writing a Darth Vader title when I saw a few pages of “Thank the Maker,” so the two naturally conflated in my mind.

In a way, though, Star Wars: Darth Vader answers the same question as “Thank the Maker”: how do you square Darth Vader and Anakin Skywalker in light of the prequels in a meaningful way? And I don’t mean that in a joking way at all. I’m watching Star Wars: The Clone Wars while I get ready for work in the morning (this is how I watch any and all half-hour programs), and I’ve been very much enjoying how the show tries to balance Anakin’s character and bridge the gap between Jedi hero and Sith villain. He’s heroic, dashing, and loyal, but he’s also possessive, violent, and impulsive.

Kieron Gillen, naturally, has a very good answer to this question, which is Star Wars: Darth Vader. After the destruction of the Death Star in A New Hope, Darth Vader is on the outs with the Emperor. Shocked into action by this abandonment, he reaches out to bounty hunters and the mysterious Doctor Aphra, a rogue archeologist, in search of three things: the answer to the Emperor’s strange behavior towards him, a personal standing army, and the identity of the strange young man who has his old lightsaber…

What Gillen does absolutely right here is not try to make Anakin Darth Vader—rather, he tries to make Darth Vader Anakin. That sounds like it’s just semantics, but the direction of characterization is important here. The Vader we see here is Vader, James Earl Jones growl, clipped, cryptic remarks, swift, efficient violence and all. But, occasionally, we see Vader reflect on his life before. When revisiting Geonosis, the planet on which he and Padmé first confessed their love for each other, he flashes back to a single panel of that before telling his companion to stop asking him any personal questions. Gillen’s Vader has a rich internal life, as he realizes that his place at his master’s side is not guaranteed and that the Empire sees him as an antique weapon, but he does not vocalize it or share it with others.

This is the original trilogy occasionally glancing back at the prequel trilogy. The entire tone, style, and aesthetic of the comic is the original trilogy, through and through. I cannot stress enough how great Gillen’s dialogue is, from lines meant to be growled out in deep, machine-modulated baritones to snippily condescending Imperial orders. It’s Vader at large, first and foremost, but he riffs beautifully on whatever’s at hand. As a major fan of Emperor Palpatine (may we all one day have a mid-life crisis that ends in ruling the galaxy in a waffle-knit Snuggie), I was thrilled at all the talk concerning Sith philosophy, especially how Palpatine is actually kind of a mad scientist when it comes to being a Sith. Gillen just gets it, man.

And nowhere is that more apparent than in Doctor Aphra. Aphra is an evil—or, at the very least, chaotic neutral—galactic Indiana Jones that Vader strong arms into helping him build a droid army. The best way to describe Aphra is to say that, after being caught trying to steal one of the most vicious AIs in the galaxy, she snarls, “It doesn’t belong in a museum. It belongs in an armory!” I fell in love instantly. Like Indy, she’s all too human, from setting off a laser trap that she literally just psyched herself up not to trying to subtly ask Vader not to kill her. She’s a good, chatty foil for a Sith Lord of few words. And Aphra is accompanied by 000 and BT-1, who are, essentially, evil versions of C-3PO and R2-D2. That’s right, kids—Creepio is now canon. Gillen be praised!

Lastly, the art. Salvador Larroca’s photorealistic style is a good match for the production design of the original trilogy, but it often shades a little too grotesque and on the nose for me, especially when it comes to characters based on real actors. It’s certainly not enough to deter me, but it is enough to give me some pause when I see the original trio on the page.