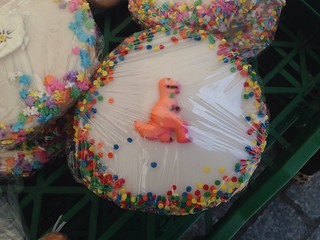 Yesterday truly felt like the first day of spring. I got up early enough to go out into the world and everybody I interacted with was cheerful! And happy! The weather was beautiful! I ate my favorite sandwich in the world! I went to go see The Huntsman: Winter’s War! It was perfectly serviceable! Solid, solid day.

Prince passed away this week.

Aja Romano on how Hamilton is fanfic.

Kayti Burt talks about how TV networks fail in their attempts to reach out to fandom.

Melissa McCarthy’s comedic career is successful and singular—why isn’t her success treated as the success it is?

This profile on Johnny Weir, Tara Lipinski, and their work covering figure skating is way more interesting than I thought it would be! It covers their careers, the low popularity of figure skating at the moment, and the effort the two are putting into making it more visible and accessible.

At BuzzFeed, Laura Goode writes about Lifetime’s active efforts to employ and promote women in the film and television industry.

Aja Romano breaks down Larry Stylinson, the One Direction conspiracy theory that may never die.

I don’t watch Steven Universe, but the love story of Ruby and Sapphire, the Gems who compose Garnet, is soon going to be a kid’s book!

The amazing Emily Nussbaum won the Pulitzer Prize for Criticism! The AV Club rounded up some of her articles to show why.

Oh, of course, Zack Snyder’s DC Cinematic Murderverse included a Robin with a two-handed battle axe. To murder people with.

Jane Caro points out how terrified our culture is about feminizing men and boys.

Here are the nominees for the 2016 Eisner Awards.

Jessica Lachenal at The Mary Sue crushes it by taking Hollywood to task for “Orientalism, Whitewashing, and Erasure.”

Similarly, Leah Schnelbach at Tor.com asks, “Why Are We Still White-Washing Characters?”

Carrie Fisher hated a line in Star Wars so much it motivated her to become a writer. Carrie Fisher is amazing.

Nathan Rabin covers the most recent Fantastic Four film for My World of Flops, and it’s a surprisingly even-handed evaluation of the film.

DC’s restructure of Vertigo resulted in the departure of Shelly Bond, a well-respected editor. A lot of people consider this shady, because DC continues to employ noted harasser Eddie Berganza, whose behavior is so bad that DC won’t hire women for his office.

The finances of American political parties is weirdly fascinating to me, so have this article about how the GOP is terrified that a Trump nomination means that lower-level races won’t get any money because their traditional fundraisers might refuse to raise funds for Trump.

At Hazlitt, Jade Blair explores how our cultural narratives about what “counts” as rape affects how women’s requests for help are dismissed.

In light of that, here’s Sarah Marshall at Fusion reevaluating the “scandalous” women of the nineties:

If we pay enough attention—not just to these women, but to our own snap responses to their stories, the ones that turned their tragedies to “scandals” and still tempt us to ignore the inconvenient truths those tragedies expose—we can learn how to act differently in the future. When the next woman comes along with a story that we do not want to hear, we will know how to listen to her.

Meredith Talusan writes about “Eve,” a pseudonymous trans woman who has been out only on social media for the last two decades, but is lately feeling the pull to connect her two public faces.