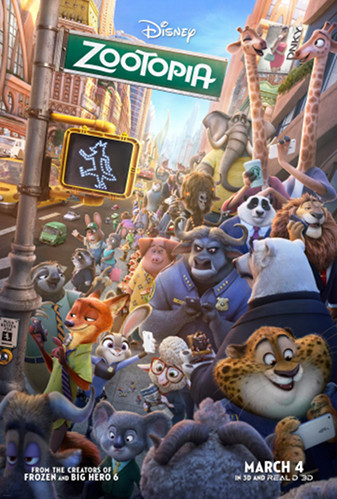 As an Aunt to Werewolves, I get excited whenever I see something amazing happen that, to them, will be just a part of their childhood and the way the world works. My nieflings will never know an America without marriage equality or a Star Wars without women and people of color. (Sidebar: if you haven’t seen the Rogue One trailer, what you are doing reading this review go watch it immediately.) And they’ll always have had Zootopia to introduce them to complex concepts like bigotry and internalized bias, something I never expected of this movie when we first began hearing about it.

Zootopia opens by explaining how its anthropomorphic animals came to be, which may seem like overkill for a film aimed at kiddos and people fond of Disney’s Robin Hood (an inspiration for the film). But it’s actually very important. Only mammals have evolved, and predator species are still seen as tough and aggressive by prey species, who are, in turn, often seen as weak and emotional by predator species. These prejudices seem more pronounced in rural areas, so bunny Judy Hopps can’t wait to become the first bunny police officer and move to the big city where she can make a difference. But Judy is horrified to discover that she’s been assigned parking tickets instead of an actual beat. Still, nothing can keep her down, and she soon finds herself embroiled in an investigation of missing mammals throughout Zootopia. Unfortunately, since Chief Bogo sees her as a mistake at best and an annoyance at worst, her only resource is Nick Wilde, a fox con artist she manages to corner into helping her. As they investigate, Judy begins confronting biases towards prey—and predators. Including her own…

Nick Wilde, Judy’s partner, has been getting a lot of love from the Internet, from his sardonic demeanor to his tragic backstory to generating the most perfect .gif to represent “showing up late with Starbucks” once the DVD hits shelves. (Also, he’s based on Disney’s rendition of Robin Hood, ensuring that everybody’s going to be feeling weird about suspiciously foxy cartoon foxes this year.) But can we talk about Judy? Judy whose parents who don’t believe in her dreams—not in an abusive way, but in a well-meaning way that’s still terrible—who never lets anyone tell her what she can and cannot do? Judy whose greatest dream is to serve, protect, and make the world a better place? Judy who always, always tries and learns from her mistakes, to the point that the film’s mandated song is all about that? Judy who makes a huge mistake and owns up to it when she hurts Nick because it’s the right thing to do? Judy whose greatest lesson over the course of film is that life is messy, but that just means we need to be more empathetic and kind and open to one another to heave together?

Judy Hopps is a heroine I look up to, and exactly the kind of heroine kids of all genders need.

The predator/prey dichotomy has been received largely as an an allegory for racial bias, but like Marvel’s merry mutants, this allegory is slightly more flexible and therefore more useful than a one-to-one comparison. Judy never runs into gender bias, but assumptions about prey and small mammals (several characters are horrified to hear that an otter could attack someone) are coded in similar ways to sexist assumptions about women—physically weak, emotionally fragile, and intellectually inferior. It’s definitely mostly modeled on racism and racial biases, but I think it provides a good jumping off point for discussions about most biases

And let’s not forget that Zootopia is a fun and frothy animated comedy. It’s more character and story-focused than joke-focused, which is a welcome relief for a film marketed towards kids. It’s dense with visual gags—mostly animal puns on modern products and shops, like Judy’s iPhone boasting a carrot logo instead of an apple and having a MuzzleTime app—and there’s plenty of great animation. I was particularly taken with Nick’s laugh—Nick is presented as a “safe” predator (which gets explored and exploded during the course of the film), so it was always nice to see his laugh, which is clearly modeled on vulpine behavior instead of human behavior.

It’s fun, it’s visually appealing, and it explores and engages the topic of racial biases in an accessible way for kids of all ages. What more could you ask for?