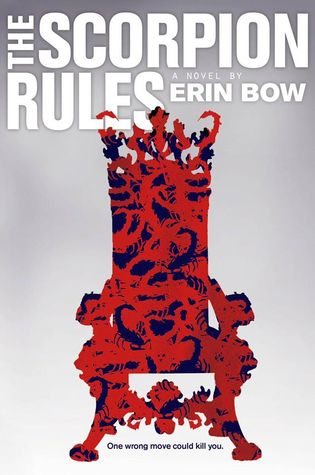 If you’ve been a reader for long, you may know that I have a soft spot for young royal women with steel in their eyes and the world on their shoulders. This stems from being reared on The Legend of Zelda: Ocarina of Time, wherein that incarnation of the eponymous princess sacrifices seven years of her life and, perhaps, the player protagonist to save her kingdom. It’s a soft spot that goes often unsatisfied, because grim-eyed shield maidens have strangely not become a popular archetype in fantasy. But when it’s satisfied, it’s often satisfied well, as in the case of both Kristin Cashore’s Bitterblue and Erin Bow’s The Scorpion Rules.

The Scorpion Rules takes place in a distant future, where Talis, the AI the UN tasked with protecting humanity from itself, took the nuclear option of doing so. Four centuries later, world leaders must deliver their children into Talis’ care until they reach eighteen years old, at which point they are freed and can only become a world leader if they have a child to deliver to Talis. These Children of Peace, kept in Preceptures, are Talis’ way of keeping sovereign nations in line. If they go to war, Talis will not only nuke their capital from orbit, he’ll murder their children. The Children of Peace accept their roles with dignity, and the de facto leader of the current crop is Greta Gustafsen Stuart, Duchess of Halifax and Crown Princess of the Pan Polar Confederacy. When one of their number is killed, he’s replaced with a brand-new nation’s Child of Peace: Cumberland’s Elián Palnik, a hostage wrestled out of hiding. Elián doesn’t understand manners, let alone how a Child of Peace is supposed to conduct themselves, and his repeated attempts at rebellion against the Precepture open Greta’s eyes to the realities of her situation.

Not that Greta is necessarily blind to them, just necessarily numb to them. She knows that, if the Pan Polar Confederacy goes to war, she will be killed. Greta is intimately aware of the violence and surveillance that pervades her existence, even if its largely out of sight. When she’s under threat of torture, she comforts herself with the knowledge that her mother should let her die. Greta’s royal self is poised, strong in will, and graceful.

But she’s also a young woman. Greta’s youthful bravery comes out in the ways in which she is scared, the ways in which she is hurt. And I loved that. I think it’s too pat and androcentric to only applaud Exceptogirls, teen heroines who are seen as worthy of adulation for the ways in which they adhere (but not too much, that’d be queer) to masculine norms. Greta is not a warrior quick on her feet—Greta is a political hostage making the best of her situation. Her fear does not define her—the way she pushes through that fear is. In the narrow scope of agency allowed to her, Greta, for the first time in her life, makes choices, and those choices are both heartbreaking and totally logical.

The synopsis for The Scorpion Rules can sound like the set-up for a love story, but it’s really not—at least not between Elián and Greta. To say any more would spoil one of the most delightful aspects of the book, but I will say two things: Greta’s relationship with [REDACTED] is so gorgeously written that I may have screamed at the book when certain characters started kissing. And if you set up a “love triangle” like that, I discovered, I will always root for one side of it. (Was that oblique enough? I hope so.)

The Scorpion Rules also satisfied my newfound taste for post-humanism in science fiction. The Children of Peace’s keepers are all artificial intelligence, but the smartest AIs in this world order—including Talis—used to be human. And it’s not simply that Bow explores how this affects the AI characters, but also the relationship between the AI characters and the human characters. Greta and the Abbot, the AI in charge of the Precepture, have a strange, loving relationship that affected me deeply.

The Scorpion Rules is complex, messy, and human, and that’s what I ask of the best speculative fiction. I adored this book.

2 thoughts on “Review: The Scorpion Rules”