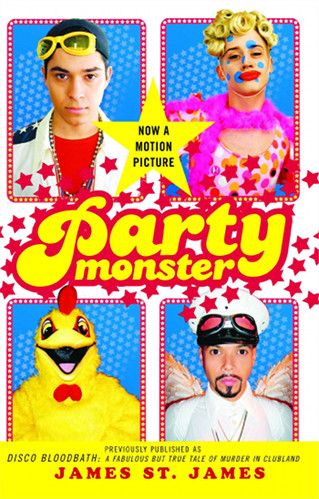 Yes, RuPaul’s Drag Race, RuPaul, LogoTV, and World of Wonder have become awful cuddly as of late—presumably the result of natural aging, a more welcoming society, and higher production values. (Although I still spend a lot of episodes murmuring, “Man, remember when Mac was a sponsor?”) But they weren’t always that way. Once upon a time, RuPaul and the personalities of World of Wonder were young, tough, and viciously glamorous. Case in point: James St. James,

I’m familiar with James St. James because of his Transformation series on World of Wonder’s YouTube channel. (Like a YouTuber thing, I suppose? For whatever reason, I am somehow too fandom old to wrap my head around YouTubers, despite being on one end of their target demo. Uh, oops?) The cherubically bald James St. James invites makeup artists, drag queens, and other cosmetically creative types to paint his face while he gently interviews them. Back during the seventh season of RuPaul’s Drag Race, I used to watch Miss Fame’s makeup tutorials to lull my anxiety into an unsuspecting stupor, and I moved onto James St. James for much the same reason.

Somehow, it never occurred to me that St. James was the very same St. James of Party Monster fame, being young enough that I missed out on the specific Club Kids bonanza entirely. (It’s easier to link to it than it is to explain in the space of one of my book reviews, so, please, indulge yourself.) All I knew is that I was sixteen and had a weird thing for Seth Green (how, I have no clue, since I hadn’t seen anything he was in) and wanted very much to watch a movie where he played a queer character. (My adolescence, everybody!)

And yet, they are. To paraphrase Chani Nicholas, we live so many lives in our bodies.

Party Monster—originally published as Disco Bloodbath in 1999 and released under this name in 2003 to promote the film adaptation—tells the story of the downfall of the Club Kids. Namely, the murder of drug dealer Angel Melendez by the undisputed leader of the scene, Michael Alig, as told by another top tier Club Kid, James St. James. It’s true crime as filtered through the vicious, stylized haze of the Club Kids’ perspective on the world, and was deservedly nominated for an Edgar Award on its release. If you’ve a hankering for rubbernecking at very alternative lifestyles and crime, you’re in the right place.

And it’s a gonzo, ugly lifestyle, intended to be as loud and outré as humanly possible, the kind of lifestyle where it makes sense to St. James, on some level, that Alig just trips into running an underage prostitution ring twice. (Reading about that made me feel sick.) But it’s fascinating, to see St. James lay out the club scene and inhabit it in its decay, struggling to hang onto it even when faced with the fact that Alig is a murderer and nobody seems to care. (Even Alig seems more upset that his life, as he knows it, is over, not the fact that he murdered Melendez.)

I stress, however, that this is not a book about St. James realizing the error of his ways—rather, it’s about St. James coming to terms with what happened and how the underground culture he adored has fragmented beyond repair. And he certainly doesn’t come off as saintly here, opening the book up with a frank description of ketamine and casually talking about how he turned a nice lesbian named Mavis into a drug dealer par excellence. But he has a certain eye that his cohorts lack. Even after a staggering ketamine bender, he’s conscious and awkward of Alig’s rampant drug addiction.

And with that eye, he can see the seam between their world and the mainstream world. When the Club Kids won’t take Melendez’s death very seriously, he finally turns to the police, only to discover that New York’s finest, circa the early nineties, don’t care about Melendez’s murder because of his sexuality, his race, his class, and his lifestyle. One of the most haunting moments St. James recounts is when he finds himself the conduit between Melendez’s grieving family and the only journalist who cares about the murder. In the space of a conversation, Melendez goes from an abstract concept to a real person.

St. James’ writing style is very of its time, all stream of consciousness, odd formatting, and high-flying metaphors, but it’s this propensity towards melancholy gravity that makes Party Monster compelling in a way, I gather, the film adaptation is not. With St. James as our guide, we land in some very beautiful lakes.

I bought this book at a used bookstore.