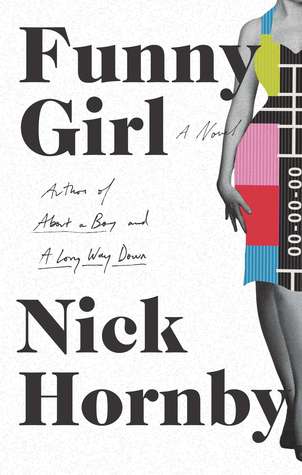 It’s a surprise to me that this is my first Nick Hornby. High Fidelity and The Polysyllabic Spree have been hanging out on the Behemoth for many a moon, but I’ve never made so much as a lurch towards them. And Funny Girl never even made it onto the Behemoth; I just saw the cover and had a vague, fuzzy memory of Jenny really enjoying it despite not traditionally enjoying Nick Hornby novels to the hilt. But I’ve been finding myself at my local library fifteen minutes before closing on weekdays, lately, stunned and a little confused by all this sunlight we’ve got now in the evenings, and I’ve had to make a lot of quick decisions in that amount of time.

But Funny Girl is, of all of Hornby’s work both fiction and non, the one most pandering towards my strange little demographic. I mean, I did recently watching all of Monty Python’s Flying Circus (and getting steadily more and more disenchanted…) and I was raised on British sitcoms (To The Manor Born and The Vicar of Dibley…) by Madame, so a novel about a young woman from Blackpool who moves to London in the 1960s and lands a leading role in a situational comedy that becomes a beloved British institution is right up my alley.

Said young woman is the Lucille Ball-worshipping Sophie Straw, née Barbara Parker, who wanders into an audition involving three of her favorite people in comedy—the writing duo of Bill and Tony, as well as their producer, Dennis. With her quick wits, firm foundation in comedy, and good looks, Sophie and the show become break-out hits. The novel follows them through the four series of Barbara (and Jim), as their interpersonal relationships get more complicated and life starts to come at them faster and faster.

Funny Girl is, like many a British sitcom, a cozy hangout of a novel, a description I’ve so far in my life only applied to movies. (My ultimate hangout movie is actually Knightriders. It’s kind of my ultimate movie in a lot of ways.) It’s a lot of witty banter and small, interpersonal moments, acutely observed in a very generous way. Even the moments of pathos are strangely gentle and harrowing, such as when Sophie meets her idol: “She had asked Lucy for proof that she existed, and Lucy wasn’t able to provide it, because Sophie didn’t exist, not yet, and maybe not ever, not in the way that Lucy existed. She began to fear that she would always be greedy, all the time. Nothing ever seemed to fill her up. Nothing ever seemed to touch the sides. (281)”

The last fifty or so pages, which covers a reunion show, is much sharper, and I actually found it more affecting, seeing characters whose day was a time that worshipped youth dealing with aging, the things about each other that will never change, and their joy in the work that they do.

And yet there are a few flies in the ointment of my enjoyment of this novel. I really loved Bill and Tony’s story and relationship, as a writing team that starts off in a similar place but find themselves going different ways. They initially meet while in jail for cruising for men, and Bill subsequently regards Tony’s marriage to the lovely June as a kind of façade as he himself starts to yearn for more artistic fulfillment. The tension of that is great, as is Tony and June working things out as Tony starts to realize that he’s bisexual. But by the end of the novel, there’s one character in a happy, straight marriage and one bitter old queen whose drug abuse is so notorious people are shocked that he’s alive. I’m never thrilled when a book tries to indicate what kind of queer person gets to be happy.

I also wish I’d seen a little more interaction between the female characters. The novel starts off strong with Sophie—then Barbara—talking to the mayor’s wife just before being officially crowned Miss Blackpool. When the mayor butts in on a kind moment between them, she starts to see the world a little differently. But Sophie doesn’t have many female friends. The one she does have, an entertainment journalist named Diane, makes sparing appearances, and the other two supporting named female characters, And the novel does end with Sophie, who found Lucille Ball so inspiring, being horrified at the comedy the young women who find her just as inspiring writes. For all its hangout graces and easy charm,

Lastly, who screamed “I GET THAT REFERENCE” when Sophie mentioned Biba? I DID. IT WAS ME.