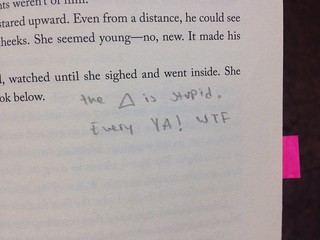 So… I went to see Noel Fielding’s show last night. I did dress up, but this got scheduled too early to include a glamour photo of my Old Gregg. Alas.

Harry Styles has joined Christopher Nolan’s upcoming World War II film Dunkirk. I am both baffled and delighted by this information.

Akemi Johnson’s piece at Code Switch about Filipina The Bachelor contestant Caila Quinn is a really fascinating look at how biracial Asian women are exoticized in different ways in media.

I don’t know how I missed this catchy ditty about being bisexual from Crazy Ex-Girlfriend, but it is adorable and covers some misconceptions about being bi. Also, any joke where someone throws to themselves makes me laugh.

POUND THE ALARM: The Xena reboot will make the “subtext” of Xena and Gabrielle’s relationship text. Writer Javier Grillo-Marxuach said on tumblr that “there is no reason to bring back xena if it is not there for the purpose of fully exploring a relationship that could only be shown subtextually in first-run syndication in the 1990s.” AYIYIYIYIYIYI!

The above is especially heartening in the context of The 100’s controversy over [REDACTED]. (Spoilers at the link, duckies.)

This New York Times profile of Ben Affleck in the lead up to Batman V. Superman: Grimdark Grimdark Grimdark is fascinating, in a rubbernecking kind of way. This film is going to spawn so many beautiful thinkpieces about toxic masculinity.

At Quartz, Jessica Crispin looks at the warnings women receive when traveling alone (or moving to the big city) about strange men versus the actual statistic that women are most likely to be raped or assaulted by their partners.

This profile of the “Girls Night In” (not its actual name) Facebook group, which is composed of 1,500 women in Los Angeles, is fascinating. It covers how our digital lives complicate and better human communication and how female-only spaces can help women. Although it’s not a utopia—conservative women aren’t really welcome.

The fifth Indiana Jones movie is happening. I am not sure why, because I just want Harrison Ford to enjoy his life.

At Slate, Jessica Winter explores why the otherwise genteel and capable Ivanka Trump’s support of her father’s presidential campaign is terrifying. I, for one, am now dreaming of a world where she took that job at Vanity Fair and became Anna Wintour’s padawan.

Melissa Petro at Jezebel talks about “good” work doesn’t make you a “good” person. Her take on voluntourism is especially sharp.

There might be a Princess Diaries 3 with Anna Hathaway? YES, PLEASE.

Adam Davidson at The New York Times Magazine looks at Trump’s devotion to “the deal” to explain rent-seeking, or rentier, economics.

Another great thing about Carol—the fact that there’s a friendship between two queer women in it.

I went down a McDonald’s rabbit hole (despite being a Wendy’s woman through and through—I once walked into a cute little restaurant, took a whiff, and declared, “THIS USED TO BE A WENDY’S” based solely on the faint, stale smell of chicken nuggets alone), so here are the fruits of my labor.

At Broadly, Emalie Marthe conducts an oral history of the Britney Spears’ vehicle Crossroads. I had no idea Shonda Rhimes wrote Crossroads!

Susan Braudy shares her experience writing a piece on contemporary feminism for Playboy in 1969. It’s a really fascinating look at a young woman engaging with second-wave feminism for the first time in her life and how the female employees of Playboy react when the male higher-ups turn on Braudy and her piece.

And, lastly, have y’all seen the #80sXMen Twitter hashtag Kevin Wada started after the uniforms for X-Men: Apocalypse turned out so boring? Because it is cute.