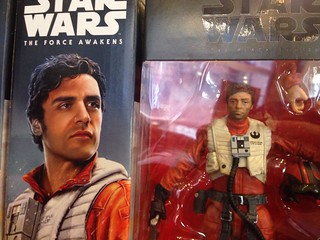 I didn’t know Poe Dameron was played by Peter Lorre. I literally looked up from a remarkably charming itty bitty Luke action figure, whose face sculpt and paint were very on point, to see this, uh, interesting take on Poe.

Lady Business celebrated its fifth birthday this week! To celebrate, we’re giving away five books selected by our editors—check it out here! It’ll be open until March 22nd.

At HowlRound, James McMaster looks at how “Hamilton is Not the Revolution You Think it is.” This is the first piece of criticism I’ve seen with the show that pushes back at it, which I think is really useful, although, not having seen the show, I can’t speak to that fully.

Dr. Adrienne Keene at Native Appropriations digs into the problems of J.K. Rowling’s History of Magic in North America in great detail. I’m just… kind of flabbergasted that Rowling thought this was a good idea.

In the same vein, Katharine Trendacosta looks at the other ways History of Magic in North America has failed, especially in terms of American history.

We almost saw Harley in her traditional jester costume in Suicide Squad.

Zendaya will be playing a “key role” in the upcoming Spider-Man, which makes me 1000% more interested in it than I was previously.

Janelle Monaé has joined Hidden Figures, a film about the three African-American women who worked on NASA’s Friendship 7 mission. Monaé is amazing, and I’m so happy she’s lending her talents to this project.

That young Han Solo movie will tell us how Han and Chewie become a dynamic duo, which… like… I kind of don’t want to see? This is where all the spin-offs start losing me: when they try to explain stuff that I already love and don’t need to know more about. Shades of Patton Oswalt’s rant on George Lucas…

Lilly Wachowski recently came out as transgender—to avoid the press outing her against her will, sadly. But that does mean one of the most influential films of the twenty-first century was directed by trans women, which is great.

This is an article about Dr. Sandra Lee, a Southern Californian dermatologist who posts videos of extractions to Instagram and YouTube. It is fascinating and this is the part where I tell you I adore this woman, because nothing distracts me from anxiety and nerves more than watching her videos.

The latest installment of Autostraddle’s wonderful Hard Lacquer beauty column has detailed instructions and tips regarding moisturizer. Like, there’s a chart of what order stuff goes on your face. Use it! It is important!

The newest trailer for Captain America: Civil War dropped on Thursday. Ooooh, emotions. io9 breaks the trailer down for you.

Daisy Ridley is being considered to play Lara Croft in the upcoming Tomb Raider film adaptation. I, personally, do not think we can improve on Angelina Jolie in the role, but Ridley doing more action? Yes please.

Katharine Trendacosta’s history of Zack Snyder defending what happens at the end of Man of Steel is fascinating, and speaks deeply to Snyder’s awkward, slightly ashamed approach towards comics and their fans.

Halle Berry may play a role in the sequel to Kingsman, opposite Julianne Moore as a villain. Interest piqued.

BB-8 visited NASA’s Jet Propulsion Lab and I cannot deal with how cute the picture of BB-8 with its little visitor badge is.

Lindy West at The New York Times examines the claim from Trump supporters that they like him because he says what they’re afraid to say. But… what are they actually afraid to say? Nothing, it seems.

This 2010 piece by Molly Young about Hollister, immersive retail experiences, and the attraction of malls is really fascinating.

Harper Lee’s estate now forbids To Kill a Mockingbird to be published in mass market paperbacks—the edition that most schools purchase and use to teach the book. What.

At The Atlantic, Ian Bogost discusses how campus carry laws threaten open discussion in colleges, before touching on how the current crop of college-age kiddos are just awash in anxiety.

The Mary Sue wants feedback on the idea of possibly (but not definitely) adopting a subscription-based format. What do you think? Let ‘em know!

Vox explains why Wingdings exists as a font.

Star Trek Beyond is going into reshoots—that will add Shohreh Aghdashloo to the cast. Aghdashloo will be playing the High Command of the Federation. Aghdashloo is amazing, but reshoots this late in the game do not bode well.

Julia Rubin at Racked explains why most women on television have the same hairstyle—straight on top, lose waves on the bottom.

Willa Paskin at Slate reviews Flaked and ponders why “traumedies” have become so prevalent and so unfunny.

Films
Purchased: None
Added: Zootopia (via The Mary Sue), 10 Cloverfield Lane (via the AV Club)