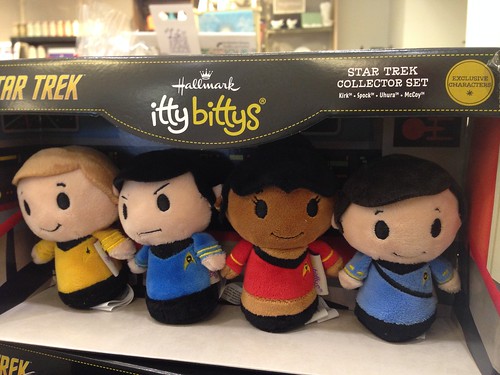 That little dude isn’t grumpy or tired or sassy enough to be McCoy. Refund, please.

Remember that Star Wars costume exhibit I went to last weekend? I wrote a thing about it for Lady Business!

Renay and I also continue our adventures in Xena with “Death Mask.”

Hey! Strange Horizons is currently accepting submissions for “Our Queer Planet,” “a month-long celebration of queer SF from around the world.” Show us what you got! (No, seriously, I’m a first reader, I will be seeing what you got.)

POUND THE ALARM: Star Wars: Episode VIII has begun filming, and has announced three new cast members—Benicio del Toro (NICE), Kelly Marie Tran (who, the Internet tells me, is playing the female lead that had to read with John Boyega for chemistry?), and LAURA DERN. I’m glad to see Lucasfilm doubling down on amazing, diverse casting, and also to see Laura Dern do anything in a Star Wars movie. What a great choice.

Australian comedian Jordan Raskopoulos—of the Axis of Awesome—announced that she is a trans woman this week. I’m really heartened by how well her journey is going, especially because she talks about the tension she feels between being true to herself and working in entertainment.

If we define progress as “forward or onward movement,” we need to identify point A and point B, and then see the tree fall. So while I think Vulture’s position–which is shared by a good few–is a well-intentioned one, I question whether failing to show sexuality outside of opposite-gender attraction is good representation. Or rather, progressive representation. Even when the lead male character in a major motion picture is seen taking a strap-on from his girlfriend.

Homoerotic humor has certainly evolved from the days of Zoolander. Now more than ever we’re seeing people walk the line. Sometimes with a sleep deprived sloppy peck, or if a studio is really feeling edgy, a night of drunken stupor. After these characters realize what they’ve done, though, that experience isn’t framed as an exploration or expression of identity. It was just that one wild moment, when their guard was totally down and the question of whether they could make a sound judgment call (or worse, properly consent) comes up. Any erotic build up between that character and the character they were subtexting with is immediately snuffed. Their point B doesn’t exist.

Have I mentioned that I read true crime articles with my breakfast on the weekends? Well, I do, and Skip Hollandsworth’s article on the “Killer Cadets” is what I read last weekend.

Kate Aurthur at BuzzFeed compares the original script of Joy to the shooting script, and points out some things:

If the story of inventing a mop ultimately feels small or domestic or otherwise inconsequential, of course that could have been true. Then again, maybe that’s an intrinsically fucked-up view of how we belittle women’s stories when we can easily watch Mark Zuckerberg talk about Facebook in The Social Network or Don Draper think up ads for seven seasons on Mad Men without wondering whether men’s creations are big enough to be worthy of our attention.

Foz Meadows ponders how acquisitive and creative fandom seems to be split along gender lines.

At BuzzFeed, Hannah Giorgis decries the common idea in pop culture that a black woman who wears hair extensions is duplicitous.

At The Mary Sue, Reb Martinez looks at how bisexuals are represented in media and, surprise surprise, we’re stereotyped. I was particularly “taken” by the trope of bisexuals being so sexually voracious as to require access to all genders, instead of… just… being… oriented… that… way… It can seem like a compliment—oh, those bisexuals, so free!—but it’s also providing an explanation for something that doesn’t need an explanation.

I cried so much on Friday night reading this piece on how nurturance culture is the opposite of rape culture, so here you go.

Slate covers a story about a gestational surrogate seeking custody of one of the triplets she is carrying. I had no idea that surrogacy was illegal in some states in the United States.

Keira Knightley could be in a biopic about Catherine the Great directed by Barbra Streisand. Yes, good, please.

This is a very silly video where a nice dog spends her day with a male model talking about the Versace woman. I loved it.

This look at New Republic into the lives of tumblr teens made my head explode, because I’ve been using tumblr for fandom stuff for years at this point, and had no idea that this teen culture was bubbling on the very same platform.

I definitely linked to this Miya Tokumitsu piece about how “do what you love, love what you do” devalues work when it was published at Jacobin, but it bears repeating in its Slate incarnation.

At The Cut, Rebecca Traister looks at Marcia Clark, how she was treated in the nineties, and how she’s being treated today.

Kesha’s request to be released from her contract with Dr. Luke, who she alleges drugged and raped her, has been denied. This is so awful.

At Paper, bell hooks and Emma Watson in conversation about feminism and reading, among other things. This is a delight.

At Jezebel, Jia Tolentino reflects on Lori Maddox, a woman who lost her virginity to David Bowie at the age of fifteen in a situation that she remembers as delightfully consensual but still reads as dubious. How do we square this with Bowie? How do we square this with Maddox? Tolentino particularly talks about how things were different in the seventies—not to excuse Bowie, but to explain the cultural context of the situation.