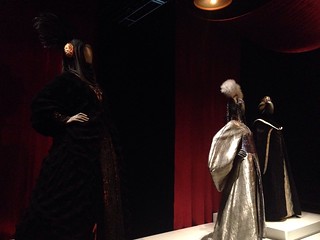 Happy Valentine’s Day, kittens! I went to go see “Star Wars and the Power of Costume” yesterday, which was absolutely fascinating. It’s mostly Padmé’s wardrobe from the prequel trilogy, but they’re all so gorgeous. I am so impressed by Trisha Biggar, the costume designer, right now.

(Also, that black travel gown might be my favorite? It’s so striking and it also looks so comfortable.)

Super Bowl? What Super Bowl? Beyoncé dropped a new single and a video, nothing else matters.

Okay, one Super Bowl thing—this adorable bumper by Pepsi featuring Janelle Monáe time-traveling from the fifties to the eighties to the now. Monáe’s eighties look is amazing and she did not skip arm day.

Asher Elbein at The Atlantic looks at how DC has tried to fix Superman, despite the fact that there’s nothing wrong with the character.

Here’s a really nice short documentary about the Dogist.

Disney is interested in Ava DuVernay directing their upcoming film adaptation of A Wrinkle In Time.

Afro-Scottish actress Eunice Olemide talked about her role in Rogue One, and I am very excited for this movie.

Hey, did you see that my fellow Lady Business editors Jodie and Renay did a cute fake anthology of their favorite short fiction of 2015?

POUND THE ALARM: Bryan Fuller will be the showrunner of the new Star Trek television show. I’m full of so many emotions, one of which is “we’re going to space, fellow queer kids!”

Amblin Entertainment’s upcoming sci-fi film Intelligent Life is interested in Ava DuVernay to direct and Lupita Nyong’o to star. The only answer to this is yes. (Yes, I hope so, not yes, they have to do it, they are busy ladies who are very good at their jobs.)

Elton John will be working with the Killers on their next album, in news that is very interesting to my high school self.

Breathe a deep sigh of relief, friends: the script for Harry Potter and the Cursed Child will be published in book form.

This Harper’s Bazaar article on Misty Copeland is a good read and accompanied by photos of Copeland recreating Degas paintings, so it’s all an around good time.

Hayley Atwell will be starring in a new television show called Conviction—but what does that mean for Agent Carter?

Bowie above us, this Lila Cheney, Dazzler, and the New Mutants fan video is fantastic. Sage Montclair, who plays Lila, does one mean Joan Jett impression, but in space and stealing things, like space diamonds and cute dudes’ hearts.

When somebody asked Meryl Streep about the all-white panel at the Berlin International Film Festival, she said, “We’re all Africans, really.” NO. STOP. WHY.

Space Jam and Who Framed Roger Rabbit obviously exist in the same universe.

Nasim Pedrad has a new show with Fox called Chad: An American Boy, that she’s writing, executive producing, and starring in. Pedrad is amazing and her kid characters are hilarious, so I’m very excited for her.

At The AV Club, Anthony John Agnello argues that Street Fighter II was the first game where players could experience self-expression in a game, which is a really interesting way to frame fighting games in general. (What does it say about me that I would always play as Zelda in Super Smash Bros. Melee but immediately transform into Sheik? Oh, right, I’m a big queer nerd.)

Here’s a collection of vintage photos of queer couples throughout history.

The Internet Archive just debuted a Windows 3.x Showcase, so now it’s time to play SkiFree and contemplate mortality. (That’s what SkiFree is about, right?)

This New York Times profile of Paul Reubens is really interesting, touching on the queer potential of Pee-Wee’s Playhouse and how Reubens is trying to work around the fact that while Pee-Wee doesn’t age, he does.

“The Man Who Loved Grizzlies” is a 2004 article about Tim Treadwell, a man whose life celebrating and protecting grizzlies was ended by one. It’s really fascinating and kind of hard to read.

At Racked, Tiffany Yannetta looks at the history of television dating shows and how they intersect with actual dating culture.

And that ends up pairing well with this profile of Tinder CEO Sean Rad.