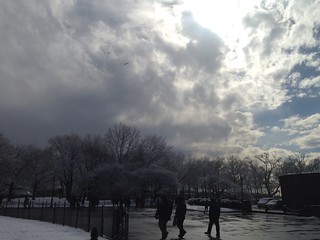 If we can just make it to March without any more snow or me being sick, I’ll be a happy monster.

This week, Renay and I continued our adventures in Xena with “Callisto.” Also at Lady Business, I shared my favorite media from January, which were Star Wars: The Force Awakens and Late Night Tales: Jon Hopkins. (I listen to more than eighties music! Sometimes I have to calm down.)

This BuzzFeed News article about how immigrants from Muslim majority countries have their legal status used against them by the FBI is really, really harrowing.

I was prepared to be meh about this Suicide Squad/The Lord of the Rings mash ‘em up, but then Eomer yelled and I laughed out loud. Well done.

I have to finish my Mrs. Captain Phasma sweater by 2017, because Gwendoline Christie is going to have more to do in Episode VIII.

Vulture’s list of “100 Jokes That Shaped Modern Comedy” is a really interesting look at the history of comedy. And it reminded me that I need to watch Airplane!, because so many of the things I have been giggling at lately have just been delightfully dumb.

Emily Nussbaum on American Crime Story: The People vs. O. J. Simpson is amazing. I have got to see this.

This Coverteur interview with Saturday Night Live’s Aidy Bryant is really fun. I love Bryant and I’m so happy to see her getting to work on passion projects like Darby Forever.

Vanity Fair’s annual Hollywood issue features a cover with only women this year, which is great. (Although, as the Mary Sue points out, it could be more diverse.)

Elizabeth Banks is playing Rita Repulsa in the Power Rangers reboot and… she would be the first white actress to play the part, which feels… weird.

I don’t even watch Gilmore Girls, and I was SHOCKED to hear that Melissa McCarthy wasn’t invited to the reunion season.

Soraya Roberts’ profile of Winona Ryder is a fascinating look into both the actress herself and into the concept of “anticipatory nostalgia,” which is how a lot of people relate to her. (Also, reading about how difficult it was for Ryder to find parts in adulthood makes her role in Black Swan all the sharper.)

This profile of Miki Agrawal, the woman behind Thinx, is exhausting in the best way.

Scream! Here are our first images of the new Ghostbusters. Everybody looks so great!

This is, as advertised, the greatest story about bowling ever. That’s all you need to know.

The upcoming novel Star Wars: Bloodline reveals that handwriting is noticeably rare in the Star Wars universe, which is an interesting point in favor of the popular theory that Star Wars is a post-literate universe.

James Franco is directing a film based on the Zola tweets? And not, say, an up-and-coming black director, perhaps even a black female director? Ugh.

Kesha is making some headway in her legal battle to escape the contract that is forcing her to only work with her alleged abuser, Dr. Luke.

Channing Tatum and Joseph Gordon-Levitt are going to star in an R-rated musical comedy together. Please make this a period piece. PLEASE.

The Coen brothers don’t really understand how diverse storytelling works, which kind of puts a damper on Hail, Caesar!

Your jam of the week: Florrie’s platonic pop ideal of a song, “Too Young to Remember.” It sounds like “I Want U Back” and “Party in the USA” had a baby and includes very obvious, pandering pop culture references, like “I can’t take much more Karate Kid.” I LOVE IT SO MUCH.

Books
Purchased: None!
Added: None!

Films
Purchased: None!
Added: None!